The Papuans are inhabitants of the world’s second largest island, Papua New Guinea. Located to the north of Australia, the island and its people have for many years been widely debated on.  The origins of these blacks who refuse to be identified as descendants of Africa have for several years, been of more interest to scholars, archaeologists and researchers.

While this has been disputed, a more recent study indicates that a break–out from an African migration that took place some 75,000 years ago led to the settlement in other parts of the world including Papua New Guinea. The research is backed by genetic experiments that indicated that about 2% of Papuan genomes originate from an earlier set of Africans. 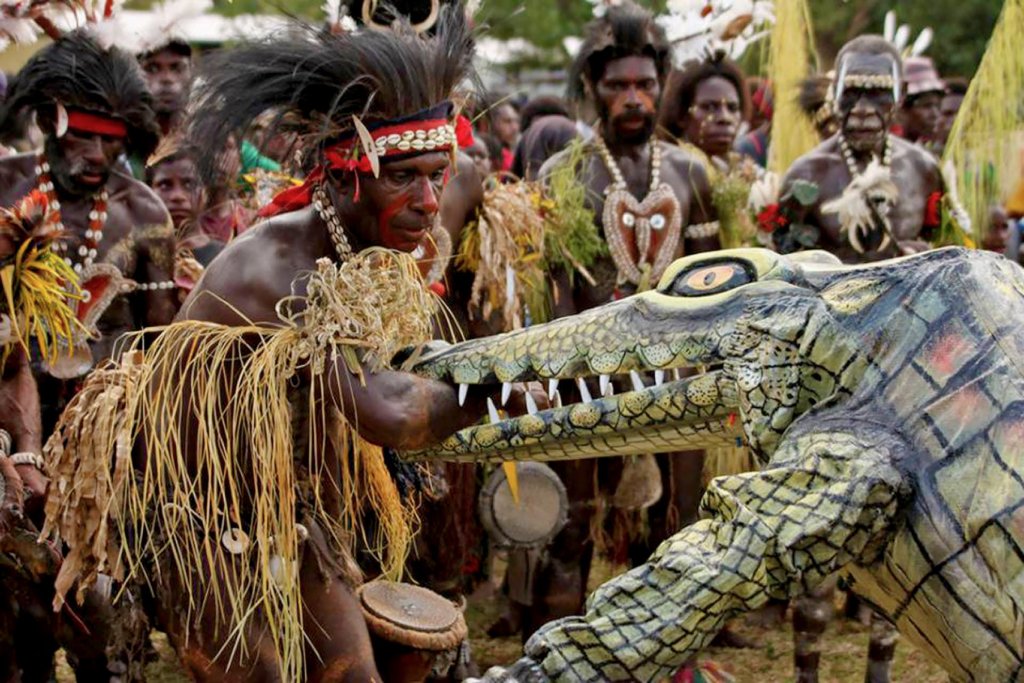 The people of Papa New Guinea have many cultures and tribes with distinctive ways of life and among them are the Chambri people.

They are popularly known as the Chambri because they inhabit the lands around the Chambri Lakes. Made up of three villages, the Wombun, Indingai and the Kilimbit, the Chambri people have a distinct culture of letting the women fend for the family and choose their husbands but one of their most popular, unique and oldest cultural practice is the initiation ceremony rites done every year that ushers boys into manhood and becoming  “crocodiles”.

To the Chambri people and a larger percentage of the inhabitants of Papua New Guinea, the crocodile is a most revered reptile that symbolises strength, spirituality and human preservation.

According to their oral history, the crocodile is said to have migrated from Sepik River to the Papua New Guinea where they transformed into humans to start life. While this is mostly unbelievable, the area does have a large crocodile population with much of them around the Chambri Lake signifying its high importance to the Chambri people.

The initiation ceremony is also a way to honour the crocodile and keep its spirit among the men; boys who are ready to become men go through a skin cutting process that leaves them with marks similar to the scales of a crocodile. 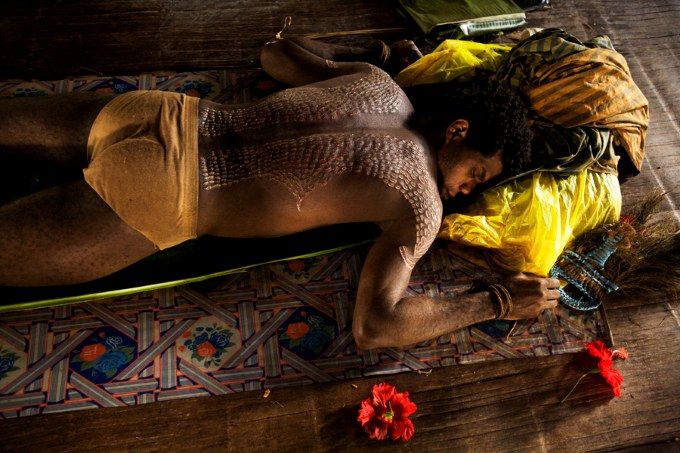 Every year, young boys and men between the ages 11- 20 who have exhibited enough potential, strength and mental growth to become men must join the ceremony to complete their acceptance into manhood and be acknowledged as fully grown men ready to take up the responsibilities of life that comes with the new stage. Once selected, the initiation begins and can take up to a month to complete and can sometimes lead to death.

The ceremony starts with the boys taken into a spiritual house by their uncles. After a few ritual practices, a scale like a pattern is chosen for the boys. Often times, the boys are given the patterns peculiar to the men in their family for easier identification; but on some special occasions, new patterns are chosen for the boys.

Once settled, the boys are held down by older men in the family while the traditional or tribal leaders start cutting deep marks in the boys’ skins identified to be about 2 centimetres long. The cutting is done with a bamboo silver specially chosen and done on the back and across the chest of the boys. 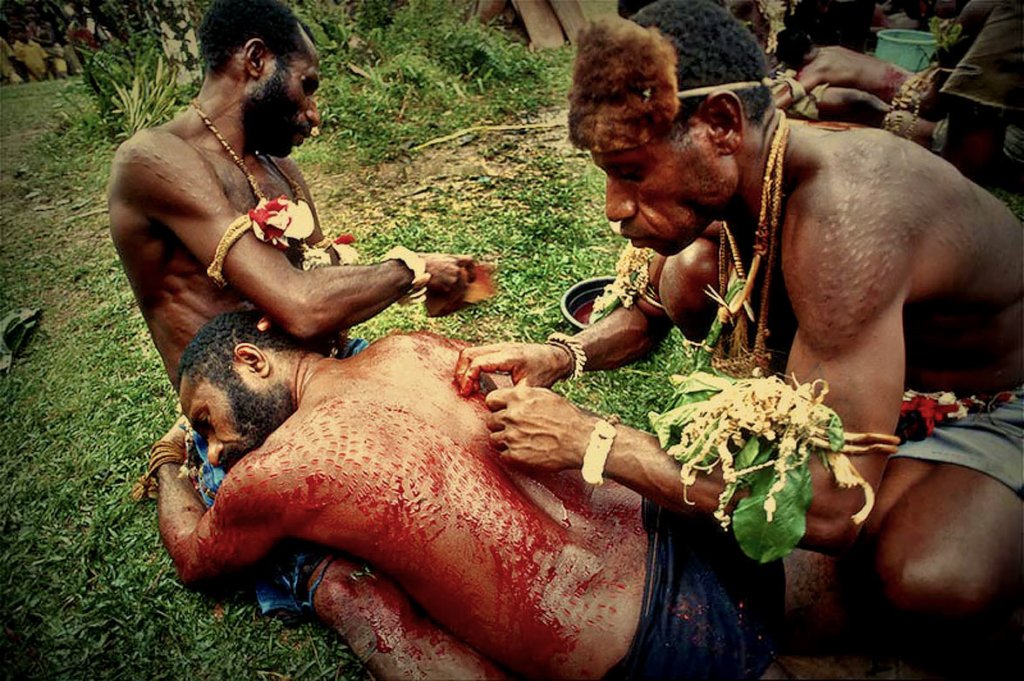 The cutting process during the crocodile initiation rites into manhood

The bloody ceremony takes a lot of skill and time and can last for as close to a month depending on the patterns.  During the initiating, boys are not allowed to show pain in any way to demonstrate their strength and endurance. The spirits of the crocodiles come to dwell in the body of the boys entering them through the several cuts on their skins to teach them endurance, discipline and give them strength for their new phase in life. A crocodile spirit dwells in the body of the man until he dies. 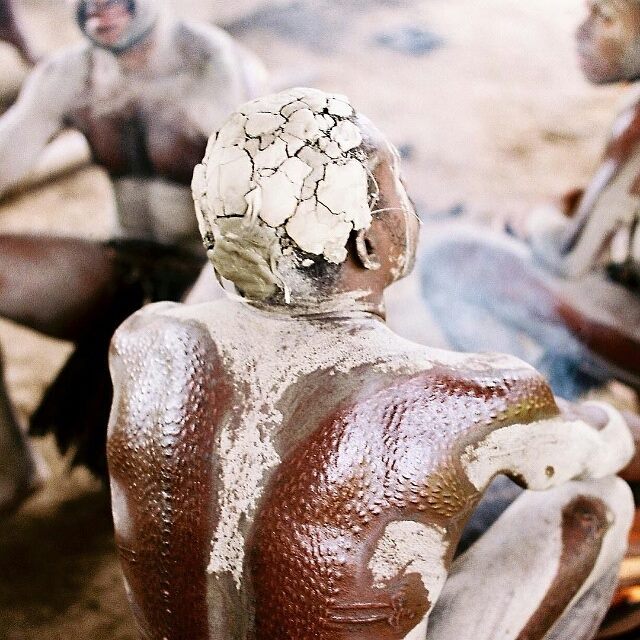 Before the marks are healed, the boys are taken through training to handle day to day life as men and are told to do away with childish behaviour. They are reminded to emulate the nature of the crocodile that is silent with its moves unpredictable until it strikes and can easily adapt to any situation.

To finalize the ceremony, the young boys have a parade ceremony where they are dressed in jewellery, beautiful headwraps and their bodies painted to signify their journey as men and crocodiles brave enough to conquer any test that comes to them. 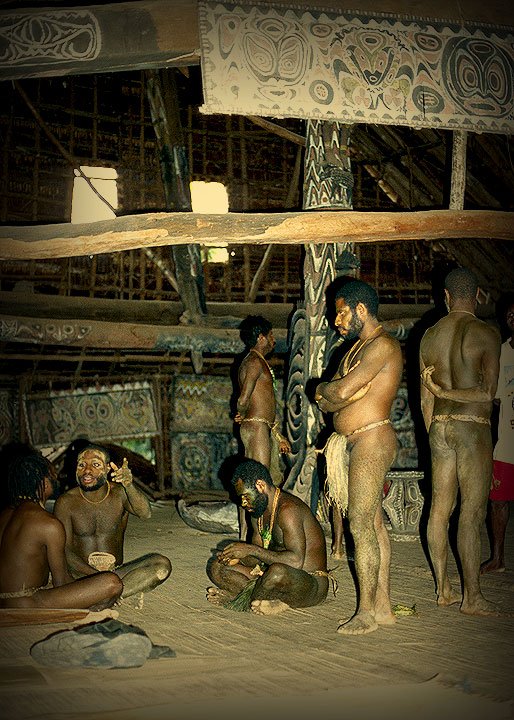 Women are not allowed close to the spiritual house while the ceremony is in the process because it is believed that they are not strong enough to endure the bloody site or deal with the spirits of the crocodiles entering its new home.

Through modernization, the rites have been greatly frowned upon but are still widely practised in Papua New Guinea among the Chambri people who believe that they are guided and protected by their ancestors in the crocodiles and must not put an end to the ceremony if they want to survive and live.

The practice is very similar to the Bessoribe tribe in Benin where the skin of boys are sliced with blades which leaves marks as an initiation into manhood and could be more proof that the Papuans are truly Africans.