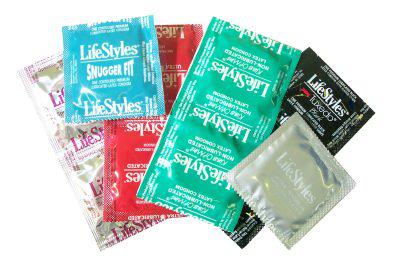 Did you know that there is a wrong and right way to put on a condom? There are also steps you must take to ensure that the condom does not break. For a condom to be effective it must be used properly. Okyro Collazo, a former Sexual Health Educator, has a few tips for you on how to ensure that you properly protect yourself. View them below:

1. Expiration Date: A number of men keep condoms in their wallet. Make sure that you check the expiration date and switch out the condoms with new ones on a regular basis.

2. Make sure that there is still an air bubble in the condom and that the packaging has not flattened out. This will ensure the condom is fresh and will not break during sexual intercourse.

3. When opening the condom move it to the side in the package and gently open it. DO NOT try to open it with your teeth. This could put a whole or tare in the condom.

4. Before putting on the condom tug it a little bit to make sure that you are rolling it on the right side. You want the side with the spermicidal substance to be against your penis.

5. Roll the condom all the way to the base of the penis

6. After sexual intercourse hold the penis by the base and pull it out of the condom to dispose of it properly.