Delivering his ruling on March 29th, the Kenyan High Court Judge John Mativo ordered the Kenyan National Assembly to expedite the implementation of the gender parity law, which stipulates that not more than two-thirds of the members of elective public bodies shall be of the same gender.

This requirement is in line with Article 81 of the Kenyan constitution, which lays out the general principles of Kenya’s electoral system. Article 27 further directs the government to develop and pass policies and laws, including affirmative action programs and procedures that will help to address historical injustices against women.

Kenyan women, especially those who are already in leadership positions, have been pushing the government to implement the gender principle in the National Assembly to ensure effective representation of women.

Currently, women only make up 19 percent of the total members in the Kenyan National Assembly and 27 percent in the Senate, against the recommended 33 percent.

Experts have suggested that the Kenyan government should nominate more women to the august house to ensure it meets the legal threshold, but the government has been reluctant to enforce this policy, citing several legal and economic hurdles.

“If the 60 days lapse without action, petitioners are free to petition CJ [the Chief Justice] to ask President to dissolve Parliament,” Justice Mativo ruled.

Mativo added that the judiciary was not in supremacy battles with the parliament, maintaining that the courts have a mandate to interpret the constitution.

He further criticized the National Assembly for failing to implement the law as required in spite of the numerous guidelines that have already been provided to it. 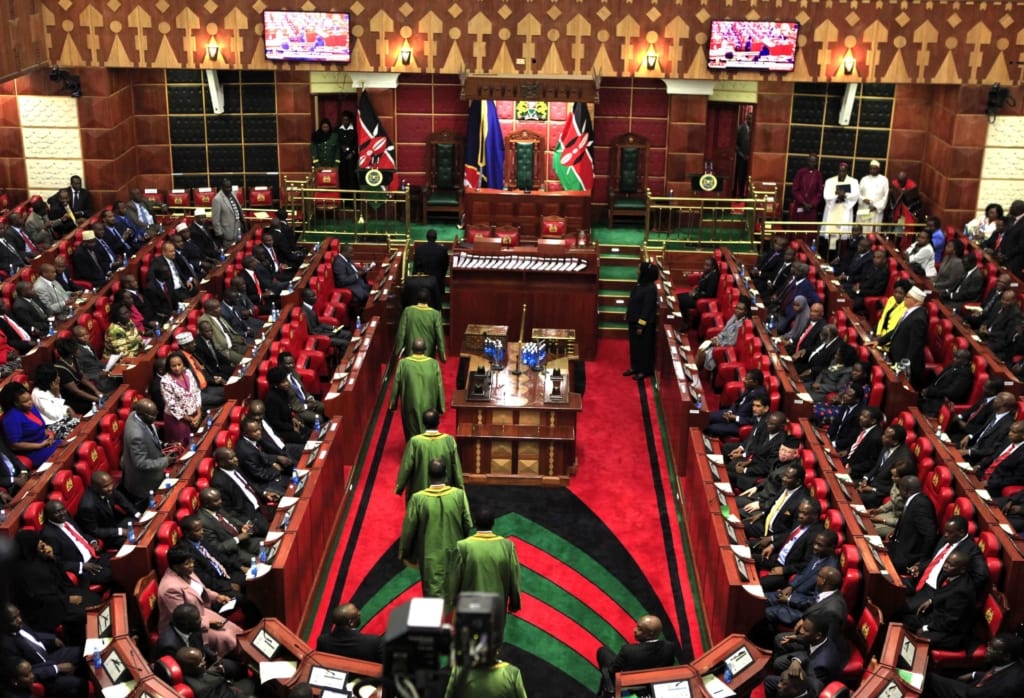 Kenya’s Supreme Court judges file into the chamber during the opening of the 11th Parliament in the capital Nairobi April 16, 2013. Photo credit: REUTERS/Noor Khamis

While the Kenyan government recognizes the importance of ensuring there is gender equity in elective offices, it is being faced with a more serious problem of overrepresentation, with some members of parliament even proposing a constitutional referendum to reduce the number of parliamentarians both in the national and county governments.

With a population of 44 million people and a GDP of $71 billion, Kenya is considered to be one of the few countries in the world with the highest number of superfluous elected leaders and elective positions.

Critics have often cited this overrepresentation as the main cause of the ever-rising cost of living in Kenya.

During his “State of the Nation” address last month, Kenyan President Uhuru Kenyatta caused a public uproar, after revealing that 50 percent of the total revenue collected in the country goes to paying salaries of civil servants.

He therefore proposed a review of all public salaries to ensure the country remains within the recommended international standards with regard to public expenditure.