Ugandans are furious about the release of a recent music video shot by a missionary group from the United States that locals say portrays their country in a bad light, according to National Public Radio (NPR). The video was produced by Luket Ministries, a missionary organization working in East Uganda, which has been accused of presenting an exaggerated depiction of the daily life in Uganda.

It features seven White women dressed in a traditional Baganda dress called a gomesi, dancing to Justin Timberlake’s song “Sexy Back,” while the singer alters the original lyrics to“I’m bringing missions back…I’m out to serve God; it’s my pact”.

During the song, which is just over 5 minutes long, the singer says, “You best deworm or get your money back, put up your net, mosquitoes will attack, bring in your laundry on your back.”

The women in the video are shown pretending to fetch water in yellow jerry cans, while cutting grass with machetes and riding motorbike taxis in other scenes.

Many say the video is deeply troubling and is part of the unfortunate tradition of the “White savior complex”:

According to NPR, the White Savior Complex is a narrative by which a White people rescues people of color from their plight.

The video carried a disclaimer saying it was only meant for laughs and was not intended to offend anyone or hurt the country of Uganda.

Following the social media uproar by Ugandans over the video, Luket Ministries posted a long statement on their Facebook page apologizing to the people they offended: 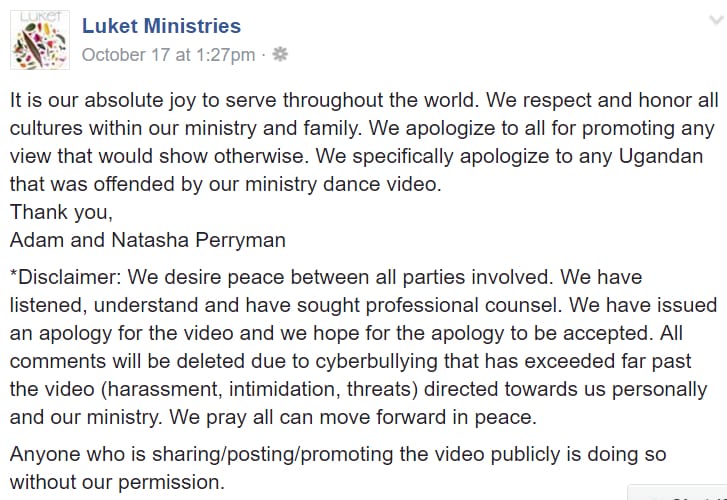