20-year-old Mpho Makutu picks scrap metal, wires and card boxes from Johannesburg’s dump sites to build remote-controlled cars and battery-powered robots and cranes. He displays his inventions in the streets of Soweto where tourists pay to see how they work.

The second-year mechanical engineering student uses the about $24 he earns during the weekends to fend for his family of four and pay their rent, reports South African news portal Sunday Times. 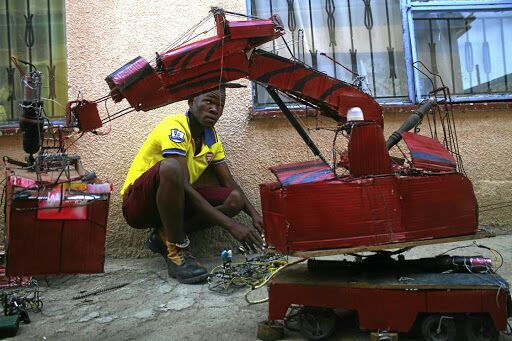 The smart young man said he started his inventions from a younger age when he uses anything to build things. He recalled getting a beating for removing parts from his father’s music system.

His most recent invention is a red battery-powered robot that grabs objects and moves them around at the touch of seven different wire levers. It took him two weeks to build the robot from cardboard boxes‚ wires and scrap metal he picked from dump sites, he told Sunday Times.

Mpho Makutu added that his dream is to become an inventor so that he can employ people and build important machines like a “plastering machine” that can save construction workers from the risk of falling from tall buildings.