Mob posing by the ruins of The Daily Record…Wikipedia

The coup d’état was instigated by members of the white conservative Democratic Party.  A group of 2,000 men attempted to overthrow the Fusionist government, made up of black Republican and Populist Party members.

Supporters of the massacre ousted black and white political figures from the city in North Carolina, obliterated black businesses and property and killed over what is estimated to be three hundred people.

“The Cape Fear River could be dammed up with black bodies, but we have no way of knowing just how many,” said Lottie Clinton, a retired state port supervisor and 1 of 13 members of a state-appointed panel that studied the night’s events for six years.

Major ringleaders of the massacre were Charles Aycock, the 50th Governor of North Carolina; John Bellamy, who became a U.S. Congressman and senator; and Josephus Daniels, who was later appointed as the Secretary of the Navy and Ambassador to Mexico.

In 1860, Wilmington comprised of black citizens at an estimated number of 10,000. Comprised of free people and slaves, these individuals worked at the port, as artists, domestic workers and highly skilled workers. In 1868, the 14th Amendment, which gave way to the reconstruction era, was ratified.

Conservative Democrats saw the changes as threats and racial tension began to erupt.  The defeat of the confederacy added more fuel to the fire.

In 1870, the Democrats were in control of the state governing body. The activities of the KKK were repressed however, paramilitary groups, such as the Red Shirts emerged.  In 1876, a previous confederate soldier named Zebulon B. Vance was in the gubernatorial campaign. Democrats in the state viewed Vance as the gateway to begin their plan.

Wilmington’s population was growing; blacks made up 55 per cent of the 25,000 residents. Their skills were growing and they were afforded with prominent roles such as businessman, architect, politician, policeman and other positions in local government. Antipathy grew as black occupants of Wilmington earned more money and their standard of living increased.

“Negro rule” as coined by prominent white men in 1897 were aggravated by Fusion reforms that they saw as direct attacks against their livelihood.  Nine individuals, called “the secret nine” included Hugh MacRae, J. Allan Taylor and Hardy L. Fennell began to devise a plot to take control of the government. 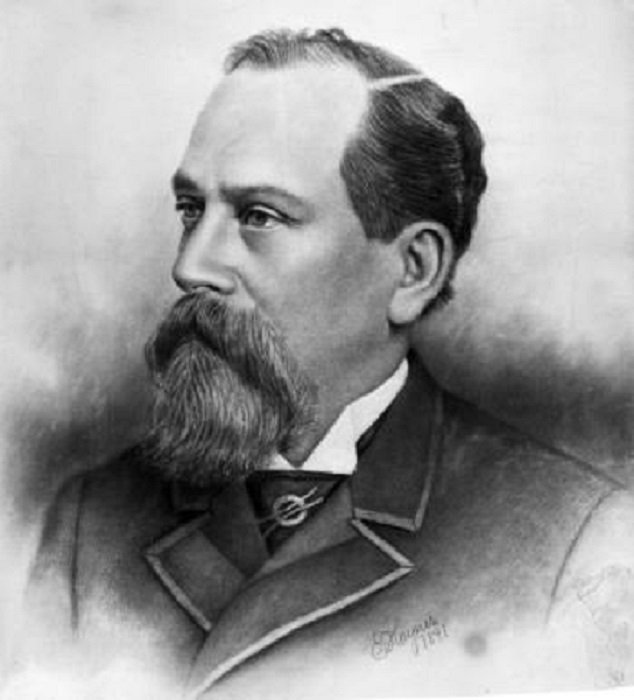 On October 20, 1898, in Fayetteville, N.C, a rally ensued by the Democrats.  Men and women condemned white men for not “killing niggers” and advocating for white supremacy. On October 28, there was a white supremacy convention in Goldsboro. After a speech by Alfred Waddell, some white men began to assault blacks and their white supporters.

Black residents of Wilmington attempted to defend themselves by purchasing firearms but were barred from buying weapons.  The already tense political climate further fueled the hate of whites as they began to assume blacks were readying themselves for battle.

In the 1898 election, many blacks avoided voting, hoping to diffuse the escalating situation.  The Fusionist party won the seat and remained in control.

“The White Declaration of Independence” drafted by the secret nine and Waddell’s “Committee of Twenty-Five” called for an uprising to rid the government of its interracial members. 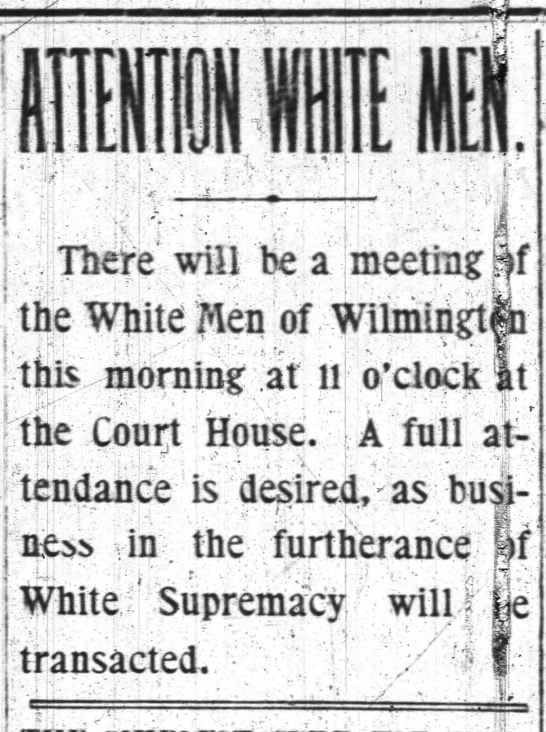 On November 9, 1898, the Wilmington courthouse was filled with 600 white men.  The group then gave the black residents of Wilmington 12 hours to comply with the terms outlined in the declaration.

Waddell and the committee members did not receive a response to the terms they laid. Subsequently, Waddell and a group of 500 men went to the Wilmington Armory to arm themselves.  They went to the offices of The Daily Record, a newspaper owned and edited by a black man named Alexander Manly and destroyed the premises by torching it as they left. The mob soon reached 2,000.

After a rumor circulated that black men attacked white men by a printing office, the mob of white men went into different black neighborhoods in Wilmington and destroyed property and assaulted blacks.  Waddell eventually forced Republican Mayor Silas P. Wright, the police chief and the board of alderman to resign at gunpoint. Waddell then took the post of Mayor and marched prominent black and white officials out of Wilmington, nearly lynching one before allowing him all to leave on trains armed with men with directions to ensure they all went far past city limits.

The massacre was lauded in The Charlotte Observer. Words by a prominent lawyer stated:

The business men of the State are largely responsible for the victory….We have tried to win them [the Populists] back by coaxing. In doing this, we have insulted some of the best businessmen in the state…But not so this year. Not before in years have the bank men, the mill men, and the business men in general — the backbone of the property interest of the State — taken such sincere interest. They worked from start to finish, and furthermore they spent large bits of money on behalf of the cause. For several years, this class of men has been almost ignored.”

Over 2,000 blacks left Wilmington, abandoning their businesses and homes.  The local government and the White House did not provide help with rebuilding costs. Blacks were disenfranchised by laws designed to ensure they were at no economic, social or social advantage over whites. Waddell remained as Mayor of Wilmington until his death in 1905.

In 2000, the state legislature formulated the multiracial 13-member 1898 Wilmington Race Riot Commission. The purpose was to investigate the full details of the event. Although 10 bills were passed to institute reparations in the form of scholarships and economic and business initiatives to boost the standing of African-Americans, none of them was passed.

Numerous commemorations have ensued, however; none have made any profound change, except to express regret over the incident. The massacre has been referenced in novels such as Crow and Cape Fear Rising.