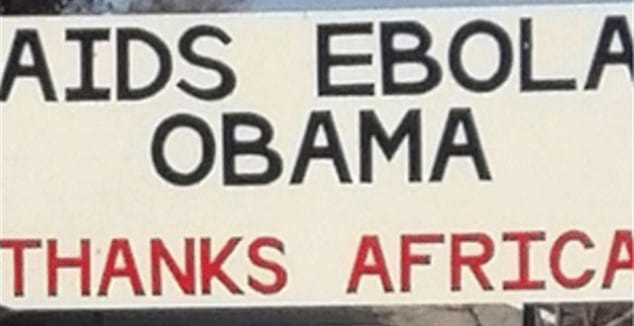 A man in Minden, Nebraska is stirring controversy over a sign he posted last week with the caption “Aids, Ebola, Obama- Thanks Africa.”

Last Monday, residents from the small town of less than 3000 people saw the sign near the highway, and some paced back and forth to get a better view, while others took it to social media to express their disgust.

The mayor elect, Greiss, said he reached out personally to the man ho put it up and urged him to take it down. “I tried to point out to him that a sign of that nature alongside a highway gives the wrong image for a community,” Griess told the Journal Star. “It was just a citizen who, I guess, was expressing his political viewpoint. He had the right to do so, but it was a sign I interpreted, and I think the vast majority of citizens interpreted, as being very distasteful.” 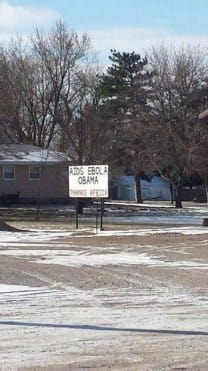 The man who put up is yet to be publicly named, however he told KLKN that the sign was just an expression of his political views and how he feels about president Barack Obama. He said he was fed up with what is going on in our country and this is the only way I could come up with to make a statement.”

But apparently the man was the not the brain behind the caption. Deena Winter, a writer for Nebraska Watchdog, noted that a bumper sticker with the same “AIDS, Ebola, Obama – Thanks Africa” slogan was being advertised on the Omaha, NE almost 3 weeks ago. 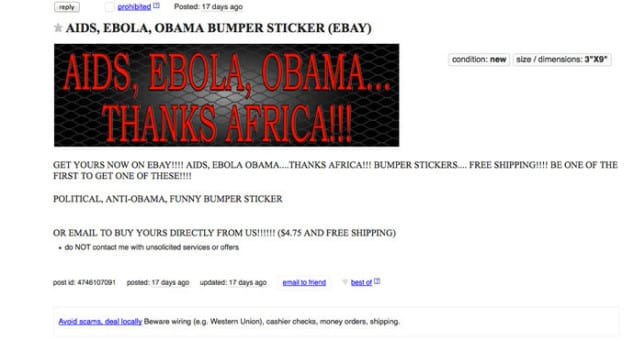 But we ask, Face2face Africa family, what do we do when freedom of speech turns into blatant disrespect, not just of an individual, but of a continent of more than a billion people? How do we as Africans respond to these type of ignorant sentiments?