During his 2016 State of the Nation address, Ghana’s President John Dramani Mahama revealed a breathtaking foreign policy initiative that, when implemented, will open the nation’s borders to all Africans. According to President Mahama, the new visa-on-arrival policy embodies the principles and ideals that have informed Ghana’s foreign policy since independence. Starting in July 2016, citizens of any African Union member state will be permitted to enter Ghana, obtain a visa on arrival and experience what the country has to offer for up to thirty days. During the announcement, President Mahama stated this move will “stimulate air travel, trade, investment and tourism.”

Although the news remains highly welcome among AU countries, others have raised concerns about the timing of Ghana’s visa policy in the wake of coordinated terrorist developments in West Africa and some other parts of the African continent. Some Ghanaians even feel it opens Ghana up for a disaster.

Speaking to a cross-section of traders at Accra’s Makola Market, several argued that Ghana remains one of the main terrorist targets in West Africa. As a result, the expected influx of foreigners has the highest potential of putting the nation’s security under jeopardy.

“We already have issues with our internal security: armed robbery, smuggling of illegal weapons and even serial killings. Why did John Mahama decide to take such a decision? As a nation we need to solve our internal problems first before opening up to the rest of the world,” argued Abena, a wholesaler. 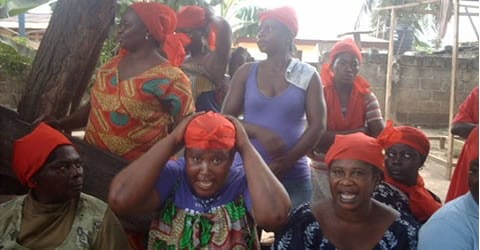 A cross-section of Ghanaians have lashed out at President Mahama over his visa-on-arrival policy. (Source: GhanaWeb)