When Abdul-Kadir Ameyaw went to Russia as an international student, he had no knowledge of the language and didn’t even think about being successful in studying in it.

But with determination and hard work, the Ghanaian student is now being hailed across the world for graduating as the overall best student with a 5.00/5.00 GPA at Russian State Hydrometeorological University.

With over 800 students graduating, Abdul-Kadir was the only one who had a perfect score. His GPA means he got an A in every subject for four years, a first in the history of his faculty.

It is also the first time in four years that a student has scored 5.00 GPA at the university, news site 3news.com reports. 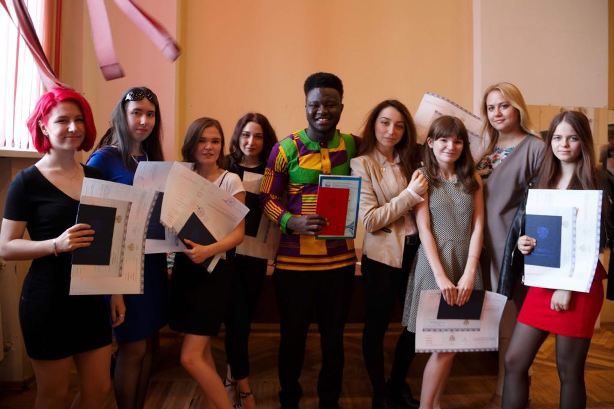 Abdul-Kadir comes from Dormaa Ahenkro in the Brong Ahafo region and had his basic education at St. John’s International School.

While at Dormaa SHS senior school, he won a full scholarship to study in the United States as part of the Kennedy-Lugar Youth Exchange and Study Program.

After an impressive performance at the West African Senior School Certificate Examination (WASSCE), Abdul-Kadir gained admission at the University of Ghana, Legon, and subsequently left after three semesters to pursue a degree in Economics in Russia on the Ghana-Russia Bilateral Scholarship.

In a recent interview, he indicated that studying in a new language was tough but he was able to sail through due to a ten-month language preparatory course ahead of his studies.

“The first year was the toughest because we were put in the same group with Russians and the lecturers never slowed down. I barely understood what was taught at lectures,” he said.

Thus, his approach was to mostly stay ahead of the class, he said, and with time, he was able to represent his university at several academic and non-academic competitions.

Abdul-Kadir even went ahead to win two scholarships for his master’s degree. He first won the Economic Olympics of The Open Doors Russian Scholarship Project from the ministry of education for winning the Olympics.

The Economics Olympics of The Open Doors Russian Scholarship Project granted him a full scholarship to pursue master’s degree in any Russian university of his choice and he has since settled on St. Petersburg State University.

He will be pursuing his Masters in Management at the University’s Graduate School of Management, which has been described as a renowned school of management in Eastern Europe.