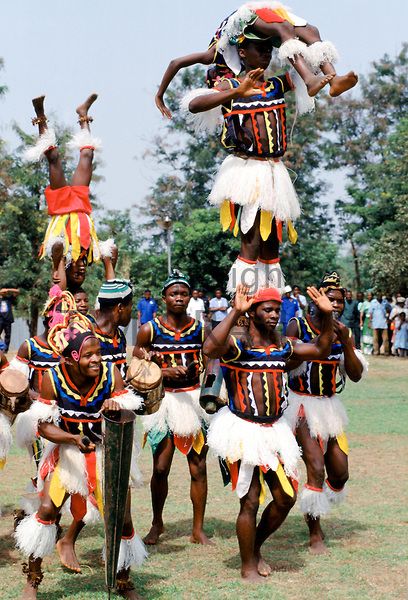 Dance is a consistent art form expressed across the continent with drums alternating as the driving force or baseline to our unique expression. Highlighting the complex, acrobatic, and spiritual components of African dance, check out the top-5 dance forms of the Igbo tribe of eastern Nigeria below.

Also known as the Acrobatic dance, the flips, turns, and jumps of the dancers are a sight to behold, evoking a host of claps and excitement from onlookers. Atilogwu isn’t all flipping, though, the skilled dancers also present intricate footwork once they dance together.

Historically, this Maiden dance was performed by young women who were ready to marry, giving potential suitors a clear idea of who was on the market. Nkwa umu-Agbogho involves the movement of the chest and waist and also served the purpose of encouraging “abstinence from sexual activities before marriage.”

This War dance was originally performed to welcome soldiers home after they fought tribal wars. Only performed by men, the dance comes from the Abam people of Arochukwu LGA, Abia State. In modern times, Ikpirikpi-ogu is still performed at festivals and community events but has been repurposed “to show the strength of a community and its conquest over collective challenges.”

The Mmanwu dance is for masquerades and recognized as the most-popular dance in Igbo culture, according to Nigerian writer Jovago. Traditionally, masquerades represent gods or messengers who imparted punishments and judgments to those in power.

They were untouchable; feared to be spirits.

It was assumed that during the Mmanwu dance, the spirit of the deity possessed the person wearing masquerade. The Mmanwu dance was and is still featured in most Igbo carnivals, celebrations and funerals including the New yam festival. Their performances are usually vibrant and mobile causing so audience

While a video for this dance could not be found, Omuru-onwa and Agbacha-ekuru-nwa is a dance performed by married women and new Mothers. The dance is used as an opportunity to get back in to shape, since the rehearsals take place weekly in preparation for the performance. The dance is described as having “a rhythmic fashion to hip-swinging music.”

SEE ALSO: Beyond the Safari: City & Country Life in Tanzania