Kenyan security forces have been commended for their prompt response to a deadly terror attack in Mandera, Kenya, where they managed to rescue at least 27 people on Thursday morning. Islamist militants from the Somali-based terror group al-Shabaab have claimed responsibility for the attack, which killed six people and left one critically injured, according to BBC.

“If not for the quick response by our security forces, we would be talking of many more casualties now,” Mandera County Governor Ali Roba told Reuters.

Roba tweets words of praise for the security team that saved 27 people:

Thanks to the timely response by our security teams, 27 out of 33 occupants of a plot were saved unhurt. Sadly 6 lives are too many to loose

The militants threw a hand grenade into a residential building, before opening fire at non-Muslims, who were reportedly from out of town.

Security forces manning the area quickly responded to the attack and managed to rescue dozens of people.

Mandera County, which borders war-torn Somalia, has been the epicenter of repeated al-Shabab attacks, with many Kenyans blaming the escalating conflict on the poorly-protected border. 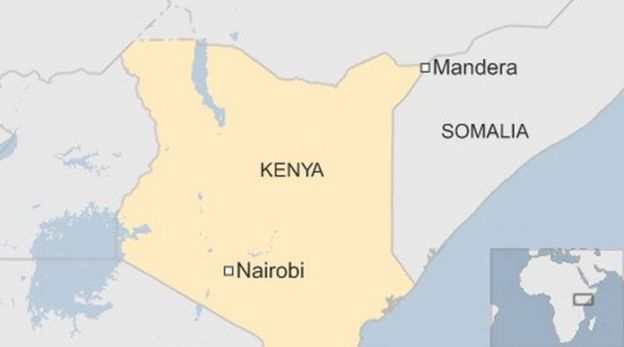 Mandera County borders Somalia and has often been the target of al-Shabab attacks. Photo Credit: BBC

Many argue that the region will continue to experience such attacks, as long as there is nothing barring the Islamist militants from entering the country.

Recently, the Kenyan government announced that it will be erecting a nearly 435-mile-long fence along its northeastern border with Somalia to stop the flow of jihadist rebels into the country.

In April, Interior Cabinet Secretary Joseph Nkaissery said, “This wall will help us check on people like al-Shabab from crossing to and from Somalia. We will not limit movement of other people.”

This attack comes as the government continues to repatriate close to half a million Somalian refugees living at the Daadab refugee camp. Daadab, which is the world’s largest refugee camp, is located in northern Kenya.

Kenyan authorities insist the camp has been turned into a breeding ground for al-Shabab fighters.

The Somali-based jihadists have staged numerous deadly attacks in Kenya since the government sent troops to Somalia in 2011, as part of the peacekeeping force, African Union Mission in Somalia (AMISOM).