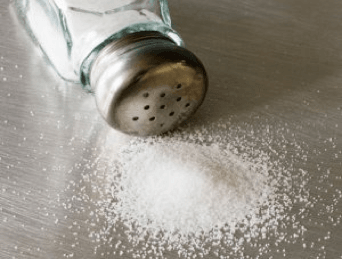 Yes, you read it correctly. According to the May 4th issue of the Journal of American Medical Association (JAMA), a study has shown that low salt intake may be linked to an increase for the risk of a fatal heart attack. How is this possible? We have been conditioned to believe that high salt intake is bad and can increase our risk for having a heart attack.

The study consisted of about 3500, healthy European men and women 60 years of age or younger. The participants were followed for 8 years. According to JAMA, the study showed that participants with a low salt diet were more at risk for dying from a heart attack or stroke. The researchers do not know the exact mechanism of action. They also found that an increase in salt intake did not increase the risk of having a fatal heart attack.

Does this mean that we should stop monitoring our salt intake and go crazy? Well, the issue with this study and many others like it is that the participants were already healthy, lean and living active lifestyles, not at all characteristic of the average American. In addition, all of the participants were white.

It would have been better if the study included the more at risk populations, including African-Americans, people with hypertension and those that are overweight or obese, to see what affects their salt intake had on their risk for having a fatal heart attack. In fact, according to CNN, Dr. Jerome Fleg, admits that the study may have been more beneficial if it targeted certain subgroups.

CNN reports that while the study does fall short, it still requires that there be an open dialogue regarding the policies related to salt intake and heart disease. They believe that we may be punishing a majority of people for a problem associated with a minority. According to Dr. Randal Thomas, a cardiologist at the Mayo Clinic, high salt intake may only negatively affect 50 percent of people with high blood pressure and even less in the general population. The issue is, how do we know which 50 percent will be affected and which will not?

My verdict is to take this study with a grain of salt. More studies must be conducted using a number of different types of participants to really pinpoint whether or not low salt intake increases your risk for heart disease. Continuing to monitor the amount of salt in your diet and eating healthy is the best way to go.