“Technology is the way to go, but let us use it to first solve the world’s toughest problems and make it a better place to be.” Those were the words of Josiah Kavuma, a member of a team of young Ugandan engineers who have developed a system for diagnosing malaria quickly without the need to take blood.

Malaria is still one of the biggest health problems in Africa, accounting for some 90 percent of cases and deaths. The costs of health services to diagnose it, drugs to treat it, and its effect on productivity continue to be the bane of economic progress on the continent. Over the years, people have devised ways to bring a life-saving solution to the disease.

There are now malaria tests that can give results with speed. But none of those rapid tests can be done without pricking the body for blood. That is where Kavuma’s system comes in. Alongside three other Ugandan developers from the Makerere University, the team has combined magnetism and light in a test that can diagnose malaria in under two minutes without the need to take blood.

Known as Matibabu, the test is yet to undergo clinical trials but has already won a prize for entrepreneurs hosted by Britain’s Prince Andrew on February 28. The team in 2013 built a prototype after combining their individual skills in research, computer science, engineering, and business, with assistance from experts in physics and parasitology. 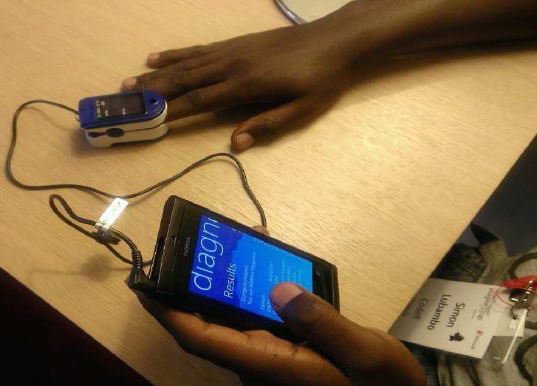 “The basic idea involves a custom-made piece of hardware which consists of a red LED and a light sensor. A finger is inserted into the device to diagnose and the results are viewed via a smartphone,” Kavuma told MakeTechX at the early stages of the innovation. In other words, to have this test done, you place your finger in the device, which then uses light and magnetism to analyse your blood composition for the significant signs of malaria infection.

What sets Matibabu apart from the rest of the conventional blood tests is that one can get results faster, 2 minutes compared to 30 minutes or more. It also doesn’t require a blood sample, so a patient could potentially test for the disease on their own, at home.

The team’s challenge now is to convince people who are still used to having their blood taken for malaria tests to embrace the innovation. Health professionals who are still using standard tests that work by detecting molecules produced by the malaria parasite must also be convinced about Matibabu.

Currently made up of the following members: Brian Gitta (CEO), Joshua Businge (CFO), Josiah Kavuma (CTO) and Simon Lubambo (engineer), as well as business analyst Shafik Sekitto, the team is aiming to commercialise the kit next year.

“We’re heading for clinical trials in the next few months, where we’ll validate our device and be able to obtain the right medical certificates and licences for commercialization,” Sekitto was quoted by Quartz Africa.

Watch the video below for how Matibabu works: