Controversial South Sudan billionaire Lawrence Lual Malong Yor Jnr has been on the nerves of Kenyans this week after news broke that the tycoon had made million-dollar donations to key agencies in the country, a report that turned out to be false.

Yor, who touts himself as “Africa’s youngest billionaire” in a recent viral video alleged that he had previously donated $5 million to the Kenya Red Cross and the South Sudan Red Cross, adding that he was going to financially support the Kenya University Students’ Organisation (Kuso) and churches in cities like Juba and Nairobi.

The Kenyan Red Cross and the South Sudan Red Cross have since denied the claim, with the Kenyan body describing it as “misleading and malicious,” Kenyan media, Citizen Digital reported.

But what has angered many Kenyans the most are the sort of praises the leaders of Kenya’s university students body heaped on Yor after he vowed to support the organization.

Many on Twitter have asked that the controversial man is investigated.

Lual malong is he blessed or brain wash

South Sudanese playboy Lawrence Lual Malong nay be the ugly face of Juba’s nouveau riche but in giving him airplay are we not sanitizing looting of state resources. I wonder. https://t.co/0Wo096itaH

Lawrence Lual Malong Yor Jnr, please don’t shame the Rolex Brand. They neither tick-tock nor stop thanks to their self winding mechanism.
The second hand on your $100,000 Rolex appears to have stalled for 5 seconds during the interview.
Anyway, that’s a no-issue. @KoinangeJeff pic.twitter.com/ydpOA4trRe

The 30-year-old who often brags about living a very expensive lifestyle, including flying in a presidential jet and wearing a 10,000-dollar pair of shoes, recently made news when he was mentioned in an investigative report suggesting that he was the stepson of General Paul Malong, one of the few powerful people who allegedly gained massive wealth from South Sudan’s civil war and stashed them in foreign banks.

General Malong, in 2017, was sacked by South Sudan President Salva Kiir and has since denied being behind the atrocities in the country which displaced over two million people within two years from 2013.

Malong has also distanced himself from the “young tycoon” saying that he is not his stepson and has even threatened to sue anyone claiming he is.

“That’s Lual and that’s his money. He’s not called Lual only. He’s called Lawrence Lual. I didn’t say he’s my son.”
“The areas are even different. His grandfather – Malong Yor – is a chief. Everybody knows. Kenyans who have gone to that area know them”, Malong said. 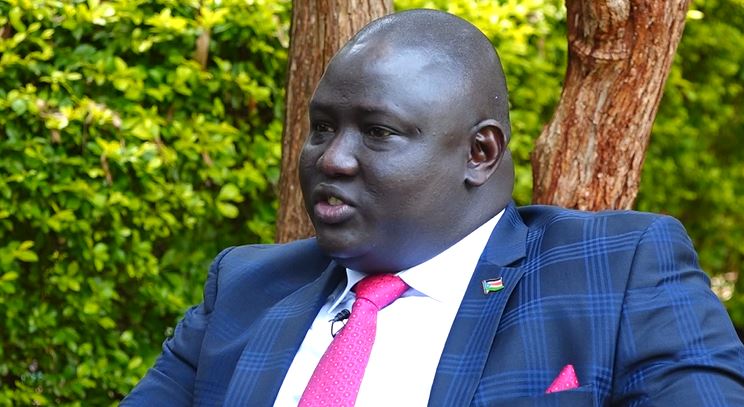 Yor has also denied claims of being the stepchild of Malong, stressing that he did not benefit from the alleged proceeds Malong gained from the civil war.

Disclosing this in an interview with Kenya’s Citizen TV, Yor claimed that he was wearing designer shoes worth $10,000 and a Rolex watch worth $100,000.

For someone who doesn’t mind flaunting his supposed wealth, Yor said that he was staying at the Presidential Suite of a top Nairobi hotel where he is paying $2,500 per night.

When asked of his source of wealth, he simply said he had been blessed by the Lord Jesus Christ.

“My Lord Jesus Christ blessed me; I fly on private jets… I live in Presidential suites… I am blessed,” the young man who aspires to be world famous said.

Yor first came into the public eye in 2017 when he posted a video of himself lying on a bed splashed with $1 million which he claimed was a donation to charity.

Since then, many people have been calling on state agencies to investigate him and his source of wealth, especially for one coming from a country whose people are languishing in poverty.

South Sudan gained its independence seven years ago from neighbouring Sudan on July 9, 2011, after a 2005 agreement to end the longest-running civil war that started since 1962.

Many believe that the country has a long way to go in terms of solving the major problem of child soldiers, lack of media freedom, food shortages, economic instability and widespread corruption

According to Oxfam International, over 7.1 million people – half the country’s population – are facing extreme and deadly hunger.

The war has not only caused the death of millions of South Sudanese and displacement of many others; it has also caused a downward spiralling of the economy, causing an increase in the price of food and fuel.

Watch the full interview of Lual Malong Yor Jnr below: