“I’m the tenth editor of National Geographic since its founding in 1888. I’m the first woman and the first Jewish person—a member of two groups that also once faced discrimination here. It hurts to share the appalling stories from the magazine’s past. But when we decided to devote our April magazine to the topic of race, we thought we should examine our own history before turning our reportorial gaze to others.” These are the words of Susan Goldberg, the current editor in chief of the famed magazine.

As a part of “the race issue,” The National Geographic publication “explores how race defines, separates, and unites us.” Decision makers at the iconic magazine enlisted the help of a historian to recount its problematic coverage of people of color.  Keep reading to learn how the magazine has presented racism to the masses. 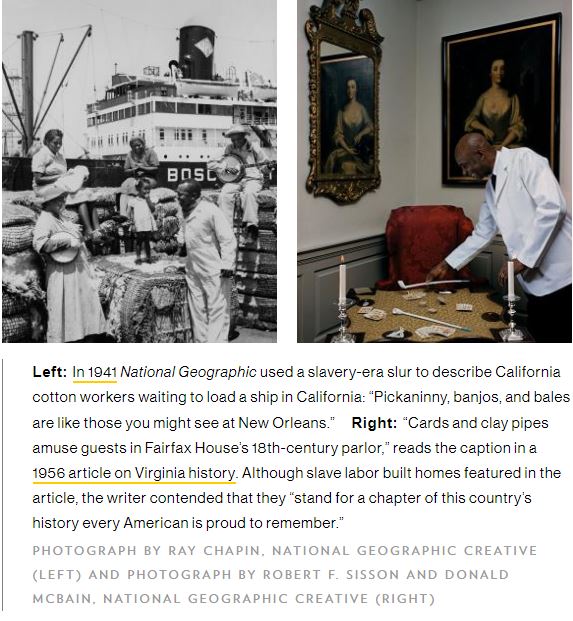 NG  now acknowledges that if the crowning of Haile Selassie, King of Kings of Ethiopia, Conquering Lion of the Tribe of Judah which took place on November 2, 1930, had occurred in the United States, it wouldn’t haven’t gotten much if any media coverage.  The NG sent a reporter to Ethiopia to document the ceremony.

John Edwin Mason, University of Virginia professor of the history of photography and the history of Africa found “that until the 1970s National Geographic all but ignored people of color who lived in the United States, rarely acknowledging them beyond laborers or domestic workers.” 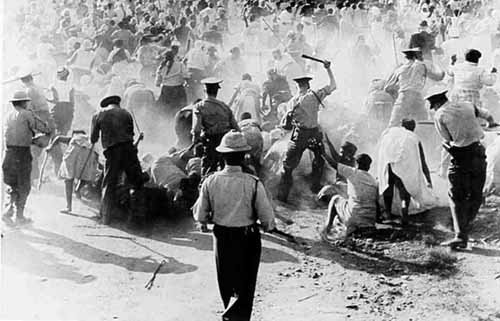 In 1962, NG printed a story about the Sharpeville Massacre – two years late and failed to mention the impact of the event, instead highlighted dancing, and black South Africans in roles of servitude.  The actual event occurred on March 21, 1960, at the police station of the township of Sharpeville, now named Gauteng.

69 protesters out of 5,000-7,000 protesters were killed when police officers opened fire on the crowd. The demonstrators were peacefully fighting for the eradication of pass laws – a system of internal passports that would have to be presented upon request and a set up to segregate the population, manage urbanization, and limit immigrant labor.

It was a move that deemed blacks as second-class citizens in their native land. There were in total 289 wounded citizens which included 29 dead children. 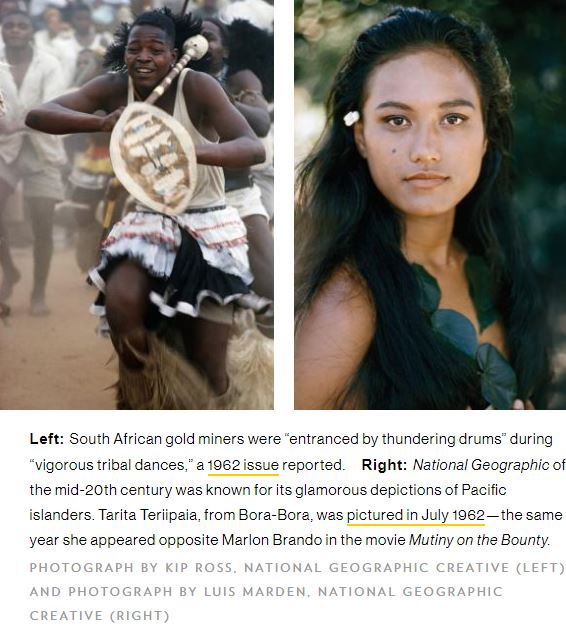 Though the magazine attempts to change their trend by acknowledging the plight of blacks in 1977 and by allowing Haitians to document themselves by capturing their own images and telling their own stories in 2015, it is still imperative to shed light on the fact that pictures of beautiful non-black women often permeated the pages of the magazine. 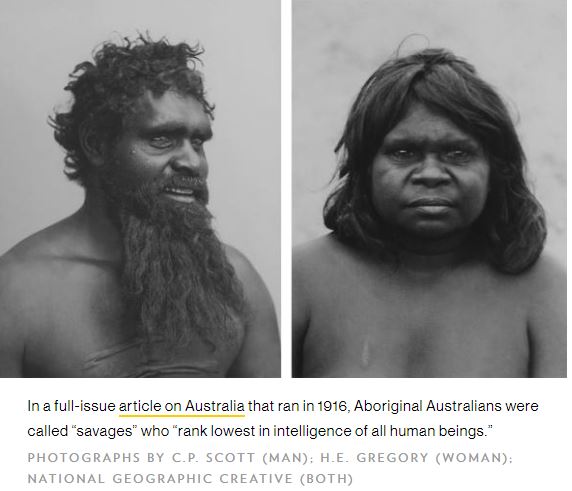 Then there were other instances of blatant racism in which a 1916 story about Australia included a caption under the picture of two aboriginal individuals who were labeled as “savages” who “rank lowest in intelligence of all human beings.”

Goldberg confessed, “How we present race matters. I hear from readers that National Geographic provided their first look at the world. Our explorers, scientists, photographers, and writers have taken people to places they’d never even imagined; it’s a tradition that still drives our coverage and of which we’re rightly proud. And it means we have a duty, in every story, to present accurate and authentic depictions—a duty heightened when we cover fraught issues such as race.”

Goldberg goes on to say:  “For us this issue also provided an important opportunity to look at our own efforts to illuminate the human journey, a core part of our mission for 130 years. I want a future editor of National Geographic to look back at our coverage with pride—not only about the stories we decided to tell and how we told them but about the diverse group of writers, editors, and photographers behind the work.”

Goldberg ends by stating: “We hope you will join us in this exploration of race, beginning this month and continuing throughout the year. Sometimes these stories, like parts of our own history, are not easy to read. But as Michele Norris writes in this issue, “It’s hard for an individual—or a country—to evolve past discomfort if the source of the anxiety is only discussed in hushed tones.”