Civil society groups in Nigeria are calling on President Muhammadu Buhari to investigate claims by Nigerians jailed in China of mysterious deaths and organ trafficking in Chinese prisons.

During a civil society forum held in Lagos, Nigeria, Osemene Osita, the executive director of civil rights group Patriotic Citizen Initiatives (PCI), revealed that they have been receiving numerous complaints from Nigerians serving jail terms in China, according to Punch.

Those who contacted PCI allege that Nigerian inmates have been disappearing from Chinese prisons under mysterious circumstances, with some claiming that the victims are taken out of their cells and executed by prison officials for purposes of harvesting and selling their organs.

“There is right to demand from the Nigeria’s Ministry of Foreign Affairs of their duties including our foreign mission in China in the light of the lingering tortures, human right violations, and gross inhumanity that Nigerians are frequently subjected to,” Osita demanded.

Thousands of Nigerians Jailed in China 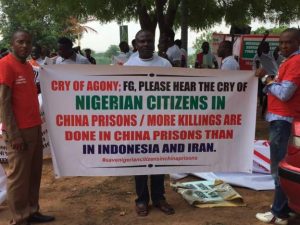 Nigerian civil society organization Black African Re-orientation and Development Organization (BARADO) has also appealed to the government of Nigeria to expedite the release of more than 6,000 Nigerians suffering in Chinese prisons.

The organization held peaceful protests in Abuja, Nigeria, on Wednesday, where its executive director Nkem Anyata-Lafia called on the government to consider negotiating with China for the release of its citizens.

“Bring home our Nigerian brothers and sisters serving various jail terms in China to complete their jail terms in Nigeria,” Anyata-Lafia was quoted by the Herald.

Anyata-Lafia also revealed that out of more than 6,000 Nigerians currently jailed in China, more than 55 percent of them have been imprisoned “unlawfully” and “illegally.”

In fact, more than 90 percent of these Nigerians have been in jail for more than 10 years and are, on a daily basis, subjected to unnatural hard labor and torture, according to Mr. Anyata-Lafia.

What’s more, some of these prisoners are reportedly not even aware of the crimes they committed or when they will be released.

“In some cases, death sentences are passed carelessly and secret executions carried out in questionable conditions. There are even alleged cases of organ harvesting to treat their rich industrialists with failing health,” Anyata-Lafia added.

Neither the government of Nigeria nor its Chinese counterpart has responded to these allegations.