The world has witnessed three bruising debates between Democratic presidential candidate Hillary Clinton and her Republican opponent Donald Trump, and a proxy fight between Senator Tim Kaine of Virginia and Governor Mike Pence of Indiana. Fear seems to be the weapon of choice for both candidates. This most unusual presidential contest may come down to voters deciding on whose fear rhetoric matches more closely with theirs. With the exception of rabid Trump supporters, few voters seem to like either candidate. For some, the choice is between the devil that you know and the devil you don’t know.

But what do Africans and African-Americans think about these choices? Do they fear a Trump presidency more than they trust a Clinton presidency? Does the African electorate prefer a “peaceful” Pence to a “charging” Kaine? Does Donald trump Hillary? Many think so, and in Trump’s own words, “what do they have to lose?” Let’s take a look at the case of the hotel magnate.

Analyzing Trump and his Supporters

For many, it’s easy to hate Trump. He’s arrogant, proud, and crude, but he also clearly appeals to a lot of people. He won the Republican nomination for president and in spite of the allegations that seem to be rolling in weekly and his many outlandish, bodacious, sometimes foot-in-your-mouth-comments, his appeal is not waning. Some see him gaining ground. To whom is Donald Trump appealing and why is that appeal growing?

Trump, however, is going for an even bigger group.  He’s speaking for Republicans abandoned by their party; the White working middle class and low-middle class Americans who miss their White president and have been impacted by gradual loss of White privilege.

Trump is “Captain White America.” He is the model of what all White America hopes for. He is the alter ego of White America. He is their voice. Ironically, he is to White America what Blacks hoped Obama would be for them. Unlike Obama, he is singing “his” people’s song and they are dancing like crazy. I imagine that the words to the song might be similar to those in Rudyard Kipling’s poem, “Take up the White man’s burden.”

Trump is the image of the great White American male, the rich White successful male, and the alpha male. He envied by  men and desired bywomen. He is American capitalism and manifest destiny personified. He is a rough-cut, uncontrollable Ronald Reagan with money. He can do no wrong and say no wrong. Many Americans love him and can’t wait to see what he will do when he becomes president.

What are Trump’s weapons? Fear and braggadocio rhetoric, mixed with little truth. He does not have to pander to any special group since he has money and he’s White. That includes woman, gays, Blacks, Hispanics, or any other special interest groups. His approach is visceral and his basic message, which is littered with truth, hyperbole, and fear is felt by just about everyone. So how do Africans feel about Trump and does it matter? African immigrants make up a small share of the U.S. immigrant population, but their numbers are growing – roughly doubling every decade since 1970, according to a new Pew Research Center analysis of U.S. census data. Most people, Black or White, never believed they would see an African-American president of the United States in their lifetime. African-Americans and African people all over the world celebrated when Barack Obama was elected in 2008. So with Hillary supporting Obama, and Obama being the first Black president, why might Trump appeal to Africans? One reason is that elections are mainly about the cult following that a candidate can build up. And everyone likes a winner, even if he’s brash and arrogant.

Analyzing Clinton and her Supporters

Clinton on the other hand, assumes she has the Black vote. She has publicly claimed to support Obama’s policies, thinking that Black people want another “Black-leaning” president. But did Obama’s policies have great appeal to the masses of morally conservative Africans? The answer is no. Although President Obama pushed legislation which had a positive impact on Africans and African-Americans, he did not aggressively seek to establish primary policies which resonated with most Africans. Clearly he was not a strong “Black” president for the African-American community. He did not seek their input in key policy decisions.

During his first year in office, former Attorney General Eric Holder was the only Black member of his cabinet. In his second year, Holder and Secretary of Transportation, Anthony Foxx,  were his only Black advisors among his top cabinet of 16. Conservative Blacks have been on the outside of key policy decisions made during the Obama administration. To the informed, this knowledge favors a Trump presidency. Ironically, both Trump and Clinton are both made from the same exact mold. Both have the opportunity to seek the advice of African-American and African intellectuals, yet neither has done it. A visual examination of the political advisors of either candidate is sufficient evidence.

Campaigns for the Black Vote

Clinton, like Obama, is courting the edges of Black public opinion. As a Black man, Obama gave visible hope to African-Americans that maybe their time of redemption, affirmation, retributions, reparations, had come. But to win the White House, he had to outwardly and vocally appeal to another group; those with money and influence. He never promised Black or African people anything. During his presidency, Obama has rarely spoken to Black people as a group. Unlike his promises to gays, he never promised the he would address the issues which have plagued Black people for centuries. 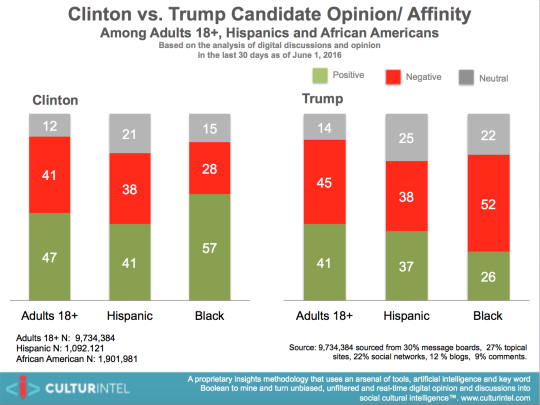 But Trump has. He is hitting some major issues affecting African, such as better schools, safety, and religious rights. These are big issues for young Black families with children. Trump knows that Obama did not and could not promise or deliver much of anything to Black people as a whole. Obama did not promise to support Christian values dear to many African people, yet Trump has.

Unlike Obama, Trump shows little support for the gay community, a lifestyle which is considered anti-ethical to morally conservative African Muslims and Christians. Unlike Clinton, he seldom even brings up gay rights issues, allowing him to unabashedly walk into a Black conservative church in Detroit and ask for support. It’s true that Obama could do it too, but for different reasons. He could do it by virtue of his race, not his policies.

With regard to America’s African policies, many Africans are still angry with Clinton’s policies, which brought down Muammar el-Qaddafi and left Libya as a failed state and a terrorist haven. The decision to move forward with military intervention went against the diplomatic efforts of organizations like the African Union. Some Africans blame her for destabilizing the region and destroying one of the most prosperous and stable economies in Northern Africa. Overall, some believe Obama’s African policies vis-à-vis Secretary Clinton have done more to hurt than elevate the fortunes of African countries in the global community.

But many people, including Africans, fear a Trump presidency. They can feel the racist tenor of his message. Trump’s slogan of “Make American Great Again” can be taken as code in calling for the return of White nationalism, while his warning statements to voters that they don’t want another Obama is a veiled call to get rid of the Black president and any other n_ _ _ _ r lover.

An American President for Africans

What about manufacturing jobs? Can either candidate bring manufacturing jobs back, specifically, the kind of manufacturing jobs that provide good paying wages for low to moderate skills persons? That will never happen since manufacturing today is not like it was in the past. According to Market Watch, “technology and new ways of organizing work have revolutionized the American factory since the Golden Age of the 1980s. Today, U.S. factories produce twice as much stuff as they did in 1984, but with one-third fewer workers.  This fact means that bringing manufacturing back will not bring back very many jobs.”

China, Indonesia, Thailand, Vietnam, and Malaysia are dominating low-skill manufacturing jobs in the world, and this trend is not going to change. Those jobs are gone forever. Any campaign or politician who promises that is deceived or simply lying.

But there are still many Americans who want to believe that those glory days can be recaptured. I see this as wishful thinking in an effort to justify a vote for their “great White hope.” The trend of American investors investing their capital in cheap labor and foreign manufacturing will only increase. China and other such countries will use their gains and economic advantages to expand their foothold into other areas of American manufacturing.

Overall, Americans want lower prices more than they want secure work. American business executives will continue to prioritize stockholder returns over American job security. If a company can secure a greater return on investment by moving production outside of the country, they will do it. This dangerous proposition could make Americans solely consumers, jeopardizing the very security of the country.

But why is this not a concern of the super-wealthy in America? Maybe they have already given up on the country. Many of them don’t pay taxes and most of their money is not in the U.S., according to Brooke Harrington, associate professor at the Copenhagen Business School and author of the book “Capital Without Borders: Wealth Management and the One Percent“.

This, according to Trump’s past business practices, is just good American business sense, unless he’s on the campaign trail stumping for votes. Then has to make voters believe that he will operate the country differently to how he’s run his business.

Is America ready for Donald Trump? Unfortunately, I think so, but we will have to wait until November 8th to know for sure.