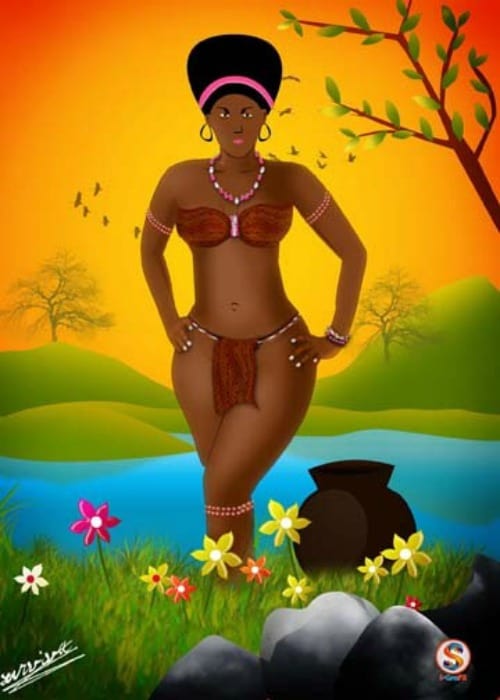 They made fun of me

Told me my skin & gums could be mistaken if it wasn’t for the whiteness of my teeth
That my unmistakably high cheekbones,
Two precious gifts from my grandmother
Stuck out too much, making me look too glossy
Along with my collar bones, that stuck out like a skeleton’s.
My forehead was as big as the blackboard, shone like an opulent diamond on an ungrateful hand
I walked with grace but sat with uncertainty
Staring at the thighs of my white classmates
Noticing their boniness, how they seemed unchanging when they sat on the hard plastic chairs
And mine seemed to fill it up to the very edges
I recall rolling around in the sandpit, admiring the powdery shade I garnered when I came back from recess
As if ash was beautiful
Praise God for baby oil.
I was never dark and ashamed
Always black & proud.
Knew I had no adversaries, simply worthy opponents
My mother reminded me of the goods & gold that awaited those that resembled Europeans
The EZ pass on life’s highways that was planted on the windshield of their blue eyes
Distant, close, ignorant
So, as aforementioned
I had worthy opponents,
Except
They didn’t know we were in a silent contest.
Combating for respect, genuine admiration from eyes as big and brown as mine.
Hoping that corporate America wouldn’t stomp it’s oversized foot upon my head
That newspapers would have spreads about my abundance rather than my incarceration
Lips as full & teeth as straight and glistening as stars that blanketed the never ending universe
Then I grew up.
Sprouted a few more inches and found out about boys.
Learned that they, too, could see
My legs, my eyes, my forehead, my cheeks
I was flattered by compliments given to me by the Caucasian ones
Ones that smelt of desire but really stunk of lust
I was called a midnight by a handsome Italian boy
I’m not offended, I’m just aware there was no promise behind the salty sentence
Hoping their televised black fantasies would be manifested by me
The interlude that led to me expecting genuine love where it didn’t exist
As I heard the conversations about the “ebony” girls their eyes would twitch over on their computer screens
Hips round and eyes battered in eagerness
On couches with cameras
Like I said, Thank God for baby oil.
But in my pursuit of being black and buoyant
Colored & courageous
I realized
Self-admiration comes before the lusting eyes of ignorant men
My thighs expanded to fit snugly in my throne
Self-hate is the painful glare from the lightbulb that tries to illuminate us
I am midnight, I am star in the Milky Way that brings heat to the icy Pluto & the distant dwarf planets
I am Nzinga, proud warrior & faithful servant to my own self & my people
I am everlasting Ethnicity tucked away in the success story of the lines on my palms
And the knotting of my bubblegum tongue.
I am pride without sin.
I am love, personified.
& if I didn’t love me, I wouldn’t love anybody.

Naomi Zabasajja (pictured) is a 16-year-old New Jersey native, the youngest of three girls, and the daughter of immigrant parents from Uganda. She attends high school & considers herself to be colorful and inquisitive.
SEE ALSO: Poem: Never Delay Your Time