According to Afrikstart, the crowdfunding market in Africa will rise to $190 million in 2016. 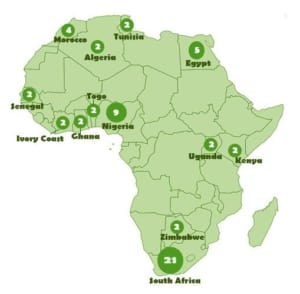 Geographical distribution of crowdfunding platforms in Africa in 2015. Source: Afrikstart.

The Afrikstart report defines crowdfunding as the manner in which a large number of people use online platforms to raise funds. Money raised by Africa-based crowdfunding portals was primarily directed to fund startups and Small and Medium-sized Enterprise’s ($17.7 million) and real estate crowd invested projects ($13.6 million).

According to the report, a correlation exists between a country’s crowdfunding performance, its Gross Domestic Product (GDP) and its level of  internet penetration and social media usage. Statistics show that 125 million Africans were on Facebook in 2015. In a survey done by Geopoll and Wide Worx last year,  48 percent of the 3,500 respondents said they accessed Facebook through their mobile phones, while only 42 percent preferred to send text messages from their mobile phones.These figures imply that Facebook has the ability of popularizing crowdfunding to potential project backers.

Factors that help explain the spread of crowdfunding as an alternative form of funding in Africa over the past four years include diaspora remittances ($35.2 billion in 2015) and the rise of the African middle class, which is estimated to be worth $350 million by the African Development Bank. Remittances contributed a third of the funding for projects in some Africa-based crowdfunding portals.

“Across Africa, villages, local communities, tribes, clans, families, business groups, and individuals create associations, often referred to as ‘self-help groups,’ in which they aggregate their savings to fund various social and economic causes. These self-help groups are called harambees in Kenya or tontines in some Western Africa countries,” notes the Afrikstart report.

In Tunisia, its Cofundy platform was used to raise nearly $13,000 in the “Ecole Chalfai” crowdfunding campaign, which helped renovate a public school. Meanwhile, the Kenyan crowdfunding platform M-Changa last year raised $ 700 million for family, friends, and harambees. It was influenced by mobile payment service M-Pesa, which is commonly used to transfer and receive funds.

The Rise of African-based Crowdfunding Platforms

“Africa-based platforms launched over 4, 939 crowdfunding campaigns. Most projects were filled by peer-to-peer lending platforms, although they only account for four percent of the total platforms,” notes the report.

On average, Africa-based crowdfunding platforms  funded 67 percent of the projects launched on their websites. Business and personal loans achieved a 95 percent success rate, making them the most successfully funded projects. Projects aiming to support social causes were the second most funded initiatives, with a success rate of 84 percent.

Some Africa-based crowdfunding platforms were so successful in raising money that they were able to fund projects outside the continent.

According to the report, the South African crowdfunding portal Wealth Migrate invests in real estate property in Australia, Shanhgai, Singapore, the United Kingdom, and the United States.

“Foreign crowdfunding platforms were keener to fund projects with a social impact. These were divided among children ($14million), to support education initiatives ($13.5 million) and to empower women and girls ($10.8 million),” notes the report.

Challenges of crowdfunding platforms in Africa

In a 2015 report titled, “Crowdfunding in Emerging Markets: Lessons from East African Startups,” the World Bank revealed that the crowdfunding market in sub-Saharan Africa has the potential of earning $ 2.5 billion by 2025.

However, the report emphasized that this prediction can only be realized if the cultural, regulatory, and technological challenges facing the African market are addressed.

For instance, the Afrikstart report notes that with adequate infrastructure such as 4G networks, internet penetration can be increased. This would then lead to increased website traffic and social media use that can boost the popularity of crowdfunding platforms in Africa.

Part of the reason why crowdfunding platforms are not widely used in Africa is because online payment platforms are perceived to be fraudulent.

Such perceptions can be changed if an effort is made to inform and educate Africans on the importance and potential of crowdfunding platforms. The report argues that this strategy could boost its uptake.

Another challenge is the lack of regulation of crowdfunding platforms.

The African Crowdfunding Association (ACfA) was established in 2015 to lobby for such regulation.

If such challenges are addressed, there is hope for Africa to be a big player in the global crowdfunding market, which in 2015 was estimated to be $34.4 billion.