Marijuana users across South Africa are full of smiles after a constitutional court ruled that private use of marijuana, locally referred to as dagga, is not a criminal offence.

Deputy Chief Justice Raymond Zondo, delivering the unanimous verdict on Tuesday, said the law banning marijuana use in private by adults “is unconstitutional and therefore invalid”.

“It will not be a criminal offence for an adult person to use or be in possession of cannabis in private for his or her personal consumption,” he was quoted by news site AFP.

JUDGMENT: The criminal prohibition of possession, use or cultivation of cannabis by an adult person for personal consumption in private is an infringement of the right to privacy of an adult person and constitutionally invalid. (Minister of Justice v Prince) pic.twitter.com/IwA35T4QE7

The court also ordered the South African parliament to draft new laws within 24 months to reflect the order, though private use can still go ahead as of Tuesday, September 18, 2018.

The government must also decide what quantities are allowed per person, and it must strictly be based on “personal use”, according to Zondo.

“The judgement doesn’t specify the amount that can be used by an adult in private use – this must be determined by parliament. It must be for the personal use of the person,” according to local media, The South African. 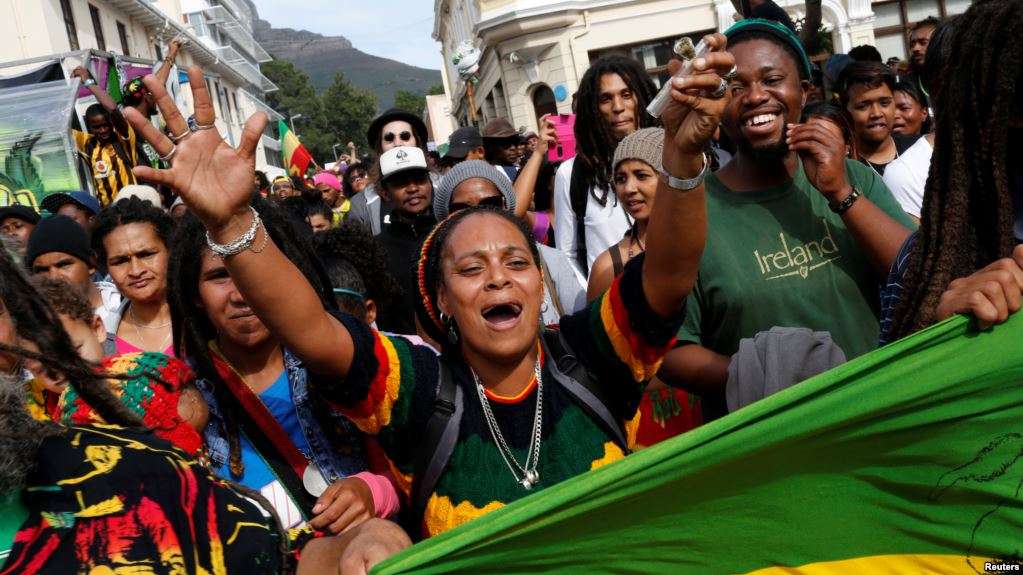 The landmark ruling has been welcomed by thousands of marijuana users in South Africa, who have, over the years, been organizing marches on the streets of Cape Town asking for drug laws to be amended in order to reap the medicinal and recreational benefits of cannabis.

In March 2017, a court in the Western Cape region ruled that a ban on cannabis use by adults at home was unconstitutional but officials, including the police, health and trade ministers were against that, arguing that there was “objective proof of the harmful effects of cannabis.”

Tuesday’s ruling, however, does not cover the use of drugs in public places, meaning that dealing in marijuana, selling it to others or smoking it outside the confines of one’s home still remains an illegal practice.

#dagga☘️ #ConCort The Cannabis Development Council of South Africa (CDCSA) has welcomed the Constitutional Court’s ruling regarding the private cultivation and use of cannabis.

Many marijuana activists, who had gathered at the courts want to be allowed to carry cannabis in public.

Marijuana, in several parts of the world, is being used to alleviate suffering from cancer, HIV and AIDS, and cancer.

Critics, however, fear that relaxing laws on its use can lead to drug abuse and other crime-related activities.

Here’s how people are reacting to Tuesday’s ruling:

I can’t believe it, the day has finally come. Private #Cannabis consumption and growth is no longer a crime in #SouthAfrica This is truly a splendid day. Such a long wait is over. Enjoy your blunts in peace children of #Africa

9/18 is now officially the 2nd 4/20 for South Africans. ❤? Cannabis is now legal for home usage and personal growth! No more being forced to act, feel and be treated like a criminal because of this beautiful plant. Much love to all!#southafrica #johannesburg #concourt #leg… pic.twitter.com/O3kxE67dmP

Instead of giving is the Land they legalise #Dagga #cannabis.
Welcome to SOUTH AFRICA@TrendingSAon3 @DrMusaMthombeni #TSAon3 ..mxm

And people still say that we are backwards…

The individual has the right to use it, irrespective of why they’re using it or whether they have obtained an expensive ‘medical license’ to do so. I’m hoping that this means cannabis legalization in South Africa won’t be divided along this arbitrary recreational/medical binary.

Some of you guys are forgetting that coffee is more addictive than #dagga. Plus cannabis has been used to help treat many diseases. This is a good day for #SouthAfrica #ConCourt

California! Get your #cannabis act together! The whole world is ahead of us???South Africa’s highest court legalises cannabis use https://t.co/bhirrRMxgN

Congrats to South Africa re legalizing cannabis possession/use in one’s own home. Their Constitutional Court just upheld an important ruling. But it may take their Parliament up to 24 months to enact the legislation- almost there. #SouthAfricanCannabis #DaggaDecision #DaggaLegal