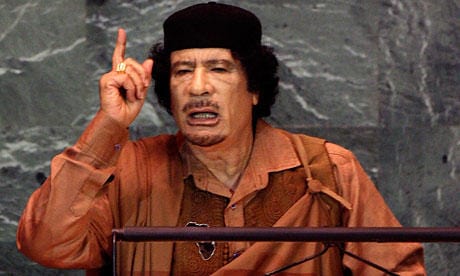 After 42 years of absolute rule in Libya, Col. Muammar Gadhafi has not only fallen from power but is now dead. Despite months of protests from Libyan citizens calling for Gadhafi’s removal from power, the former dictator vehemently refused to step down. But perhaps due to the intense violence that has been occurring in the past few months it was inevitable that somehow, some way, he would eventually be ousted from power. But how exactly did this larger-than-life figure face his defeat?

Revolutionary fighters had cornered Gadhafi loyalists in the District 2 area of Sirte. There had been rumors that he was holed up in the city of his birth but speculation also held that he had fled to the desert. In any case, NATO surveillance drones and National Transitional Council commanders had been keeping an eye on District 2 for a while and again on Thursday morning, the drones were out. Somewhere around 8:30 in the morning, according to a NATO official, a convoy of loyalists made a break from that part of Sirte and headed west trying to get out of the city.

U.S. drones and French fighter jets struck the convoy, splitting it up and forcing the loyalists to scurry on foot. It's not clear whether Gadhafi was in that convoy but a NATO official said he was, though he was not directly hit. "Two miles west of Sirte, 15 pickup trucks mounted with machine guns lay burnt out, smashed and smoldering next to an electricity substation 20 meters from the main road," reported the Reuters news agency.

The revolutionaries began shooting at the loyalists. "At first we fired at them with anti-aircraft guns, but it was no use," Salem Bakeer told Reuters. "Then we went in on foot." The ferocious fire fight lasted three hours, said Peter Bouckaert, Human Rights Watch's emergencies director, who is in Sirte. He said 95 bodies were found in the area. Gadhafi survived and fled with a handful of his men. The revolutionaries eventually found him hiding in a drainage pipe. It was, of course, Gadhafi who called the rebels rats from the very start of Libya's uprising in February. They had finally caught him.

Now it was Gadhafi, the self-styled "king of kings" of Africa who was caught like a rat amid rubbish and rocks and sand. He was captured alive. But that's when the stories diverge. The National Transitional Council's leadership says Gadhafi was killed in crossfire between revolutionary fighters and the remnants of loyalists in Sirte. Mohammed Sayeh, a senior member of the council, told CNN that Gadhafi was being transported to Misrata to the northwest. "They were taking him to a hospital," he said. In the hail of gunfire, Sayeh said, Gadhafi was shot in the feet and then in his head. "I cannot tell you whether it was from far or near, but it was unintentional," he said. "No one decided to kill him or slaughter him. It would have been much better for us Libyans and the whole universe to capture him and take him to a court."

Though we may not know for quite a while exactly what happened that led to the demise of Gadhafi many are now wondering what the effects of his death will bring about not only in Libya, but internationally as well. Not too long ago, the African stage belonged to Muammar Gadhafi.

Fellow African leaders bestowed upon him endearing nicknames: "brother leader" or "king of kings of Africa." Most importantly, Libya was among the African Union's largest contributors, paying dues for some of the 54 member nations. But Gadhafi's regime now sits in ruins, leaving sub-Saharan Africa without a major investor who disbursed billions of dollars for roads, mosques and luxury hotels. He was known for handing out large sums of cash. Wherever he thinks he can buy friendship, he hands out large sums of cash," said Richard Dowden, executive director of the Royal African Society, a London-based group that aims to foster a better understanding of the continent. "His investments bought him loyalty. It's a very African thing to do: 'He helped us, so let's help him'."

In Niger, which has given refuge to his son, Saadi Gadhafi, the ousted leader's influence is evident. A gleaming mosque built by the Libyan government in the 1970s stands tall in the capital of Niamey. Thousands attend prayers at the mosque — a valuable gift to the poor Muslim country where crowds pack into limited worship spaces. For some Gadhafi’s death is just another representation of a long-running narrative of Western powers meddling in African affairs.

Even some Africans who said they did not necessarily support Gadhafi were stricken by the way he was killed and argued that he had left behind an important legacy. “I had never been really a fan of Gadhafi, but now I am touched by how he died,” said Manny Ansar, the director of a popular annual music festival in Mali. “Love him or not, we must recognize that this is one of the greatest African leaders who influenced several generations, including mine, and found in the constancy and courage of his positions what we research in a hero. In a word: pride.”

And of course there is the other side of this story, which sees the death of Gadhafi as not only a success to be congratulated but also, another step towards democracy. President Obama praised the people of Libya Sunday for the nation's "historic declaration of liberation," and called on its temporary governing body to "turn its attention to the political transition ahead." In a statement, Mr. Obama heralded a "new era of promise" for the nation. "On behalf of the American people, I congratulate the people of Libya on today's historic declaration of liberation," he said. "After four decades of brutal dictatorship and eight months of deadly conflict, the Libyan people can now celebrate their freedom and the beginning of a new era of promise."

However, the people of Libya still have a long and hard road ahead of them. Unlike other Arab Spring uprisings in Egypt and Tunisia that had to deal with old institutions and adapting an old regime to the new one, Libya is starting with a blank slate. But as promising as that sounds, it also has the potential to be dangerous. The National Transitional Council has been plagued by infighting and the emergence of factions. The divisions have taken on an increasingly ideological tone. One thing that is for sure, however, is that history was made for the nation of Libya and a new era has begun. Hopefully the opportunity to create a better political climate and standard of living for the people, among many other things, will be achieved.