Right in the heart of the Aludnul family is a primary goal, an effort to encourage Pamie to re-discover the riches of her country, its history, its people, and to celebrate her cultural past, and mourn what has been lost. 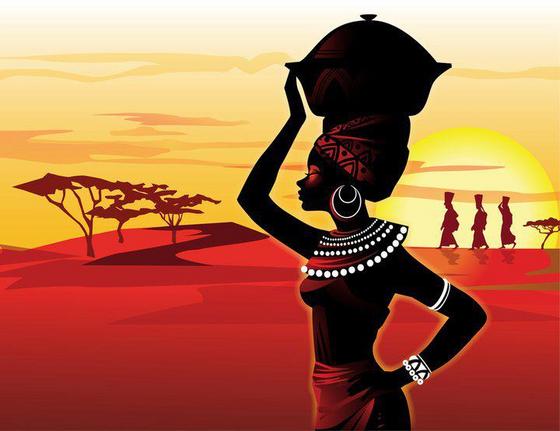 Pamie is a young, smart "sistuh" raised on Chicago's black South Side. She is the sole daughter of both Jean Claude Sakabu, a Congolese originaire from Katanga, Lumumbashi and Cathy Gusungu an original Queen from Haiti. The family arrived in the United States when Pamie was two. She did all she could to be cool, but that became even harder when her mother tried to remind her of who she was. That to Pamie was uncool; adding the fact that she was poor.

As she entered Junior High, Pamie wanted it both ways; she desperately desired to be "down" with the boyz and girlz but was too "singular" to blend easily with any group. She, a spunky, sensitive high school student, was torn between the traditional values her family had instilled in her and her burning desires to experience the new world.

In her mid high school years, the family condition ameliorated. Life improved and from there, Pamie got her chance to be down with the crowd when she was invited to a cool party. However, life was not without problems: Jean Claude Sakabu was able to take a trip back home, to the Democratic Republic of Congo with his family. Pamie’s knowledge about Africa was reasonably limited.  His desires were to teach his daughter of who she was, to educate her, to learn the truth and use it as a fuel to redeem her future. This was problematic for Pamie, for she had no interest in a one-month trip to discovering her roots. Instead, she wanted to stay in America and have a good time. But her father's wishes firmly stood and the family took the trip.

Though there was no welcoming committee of assorted Africans cheering the return of a family at the airport like Pamie imagined, her mother's first impressions of Kinshasa were positive. She and Pamie joined her father at the home of some friends in a large government house in a beautiful suburb. The wife of her father's brother, also a teacher, was very kind to her, teaching her mother and Pamie to cook Congolese dishes (including cassava leaves), taking them on trips to the market, and introducing them to neighbors.

On one occasion, her mother's new friend came from the kitchen with a plate full of small, oily fried meat, explaining that this was one of her father's favorite dishes. Assuming they were made from beef or lamb, her mother eagerly asked to be taught how to prepare the snacks. Her aunt obliged by leading her mother into the kitchen, reaching into a bucket, and pulling a single grub from a large mass of wriggling caterpillars that she had bought live in the market.

She held it in place on a cutting board and deftly slit it lengthwise, its guts bulging yellow through the long cut. Then she plopped it into a pan of hot oil. Pamie's mother, suddenly less anxious to work on her Congolese cooking skills, declined an invitation to try to outdo the performance and politely excused herself. Pamie recalled laughing at her mother as she and her father sat on the couch. Although she flinched at the thought of cooking insects, the smell of them boiling and frying is stuck in her mind till this day.

Pamie learned that most of the Congolese food is also smoked or dried to preserve for future use rather than being thrown away. Congolese have to be very resourceful for there is a scarcity of resources. Pamie found her staying terribly diffciult in a country of such grinding poverty. What amazingly struck her was the realistic image of Congo- that people work so hard for so little and we work so little for so much. In the following passage, Pamie introduces her thought.

"Mind you, I had never been to Congo. My first impressions of the richest, but most tormented nation on earth were of the people. The salvation of Congo is its women because I realize that all the essential chores fall to the women. I have never seen so many women carrying loads on their heads, walking along narrow dirt paths that passed for roads on trips to market that took all day, always with flashing eyes and magnificent smiles. One of the memorable scenes I remember is watching two women with gigantic loads on their heads, and one with a baby on her back. Sylvie, one woman, whom I got to know during our stay, was 5'2" and 110 pounds, and the strongest person I know, besides my mother of course. She carried incredible loads, always with grace and in joy.

This and other scenes captivated me for they became eye openers. At a small age the truth about my history has been hidden from me. I was brainwashed and as a result, dismissed the importance of my own culture. And as I grow and begin to think about it, the more I realize how little I have learned about not only American history but also the history of my own and other cultures throughout the world. I am just hoping that in telling my story, the reader's heart will see with clarity that a trip back to one's ancestral home can be a positive route to rediscover one's past and to undermine one's future. Or maybe I should speak for myself on that part. But really, we will learn more so we can teach one another.  This is just a thought from a young original Queen from Congo."

Maybe it's an intuition, but there are some things, which come quite unnatural, like the self. That is something one creates. Pamie’s persona changed tremendously, from being the young sassy little girl who believed she was less than three-fourth human, to an intellectual, open-minded, graceful and confident woman. I hope with these simple stories being told by our own people, the views and perceptions of those who are still blindly led will change.