Chocolate is delicious. It melts in your mouth, tastes great, and there are so many types to choose from: white chocolate, milk chocolate, dark chocolate, with peanuts, without peanuts, and the list goes on and on. 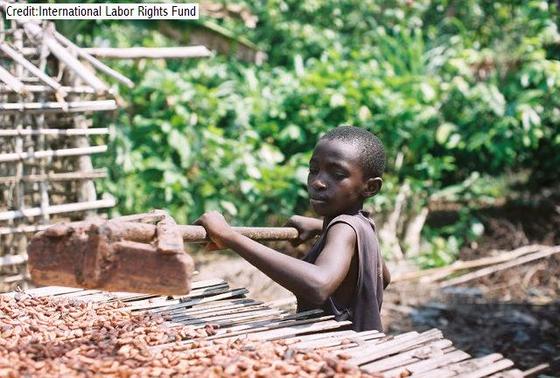 What if I told you that chocolate, the treat you enjoy from time to time is produced by child slaves in the Ivory Coast? These children are not paid anything for their services. Most of them are very young and would rather be in school. What they work so hard to produce, they have never tasted. While tons of people around the world consume chocolate, they have no idea what it is even used for. They work long hours for food just to survive from day to day and have nothing but the torn clothes on their back. Now does what used to taste sweet in your mouth seem a bit bitter?

The Ivory Coast, Nigeria, Ghana, and Cameroon make up the four major cocoa producers in West Africa. Together they make up two-thirds of the world’s supply of cocoa. It is estimated that there are 100,000 children working in cocoa fields in the Ivory Coast and other places around the world.

In hopes of ending child labor, the Cocoa Protocol, also known as the Harkin-Engel Protocol was created in 2001. This protocol was an international effort made on behalf of U.S. Representative Eliot Engel who was a firm believer of getting rid of child labor and American Senator, Thomas Harkin who fought to end child abuse. This agreement was formulated to put an end to child labor on cocoa farms.

It is now ten years after the protocol has been established and the Ivory Coast, which is the world’s biggest supplier of cocoa, is still using children to work the fields. No one has visited these cocoa farms to enforce any such protocol. Farmers say they are just doing what they have to do to survive, while others, who have worked in the fields for 26 years refuse to use children for help and choose to bear the burden alone.

It is a sad day when a child is no longer a child and is forced to grow up faster than he/she is supposed to in order to withstand hardship. Whoever truly believed slavery was a thing of the past was wrong. Unfortunately, slavery is still rampant all over the world. We live in a time where children are being exploited and abused to produce chocolate. When will actions finally be taken?

But I believe that the youth of Africa today, you and I, can unite and stand against child labor in our prospective countires. Let's join the efforts of organizations working towards this mission, and lets protect the future of our belioved continent.