Lake Natron in northern Tanzania is described as one of the world’s weirdest lakes for its red colour due to volcanic activities and its incredibly high level of alkaline with a pH as high as 10.5.

This basically means that there is a high level of mineral and salts in the water which should make it impossible for animals to survive. However, the lake – also called the Stone Animal Lake – is home to tilapia fish, flamingos and other birds that are calcified by the water when they die.

This is made possible by the sodium carbonate minerals – the chemical that ancient Egyptians used to preserve their dead – in the lake that are produced by carbonatite lava erupted from the nearby Ol Doinyo Lengai active volcano. It makes the fishes and birds as hard as stone. 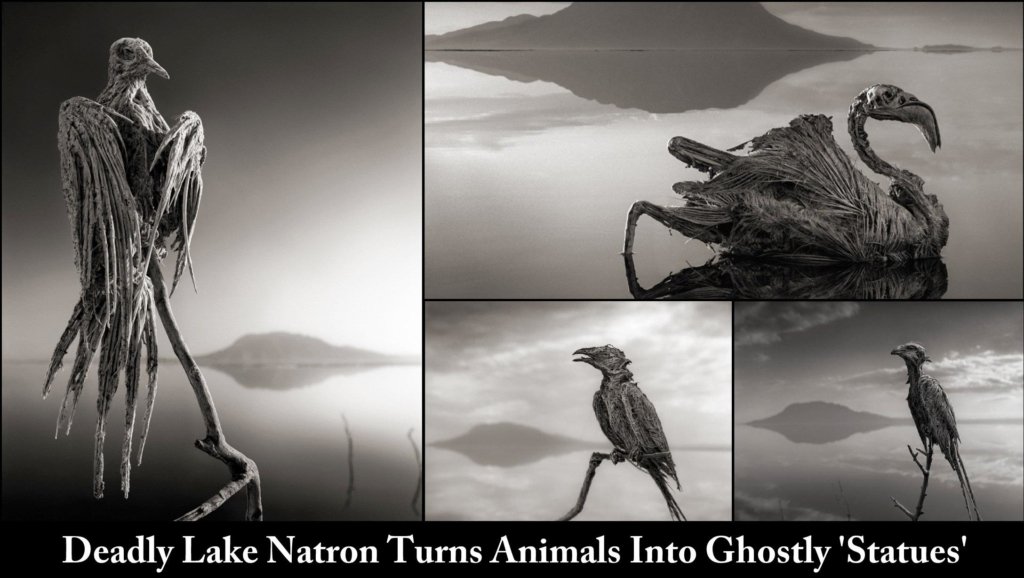 CALCIFIED ANIMALS ON LAKE NATRON, 2012 — From Nick Brandt’s book Across The Ravaged

The Ol Doinyo Lengai active volcano is described as the only volcano that has erupted carbonatite lava in human history. The carbonatite lava contains carbonate minerals often seen in sedimentary rocks, unlike most volcanoes that spew glassy, silica-rich lava.

Its red colour is due to haloarchaea, microorganisms that thrive in the lake’s salty waters, according to NASA’s Earth Observatory.

In 2017, NASA’s Landsat 8 satellite took beautiful photographic shots of Lake Natron from space showing the water’s vermillion beauty, reports Live Science. The photographs were taken at the end of the dry season when the lake level was particularly low and the concentrated salt ponds were especially colourful. 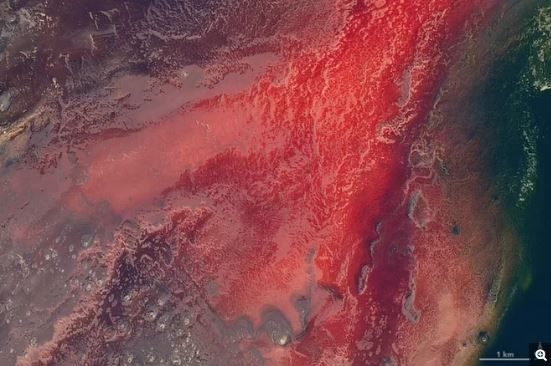 The crimson glow in Tanzania’s Lake Natron, shown here in an image captured from the Landsat 8 satellite on Marck 6, 2017, is caused by salt-loving microbes called haloarchaea.
Credit: NASA Earth Observatory 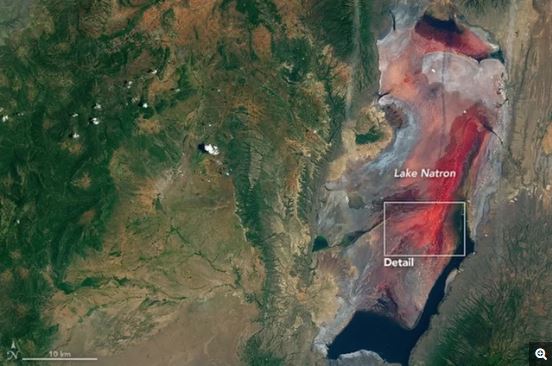 Lake Natron, located in the Rift Valley of Tanzania, spans an area of about 480 square miles (1,250 square kilometers), according to the World Wildlife Fund.
Credit: NASA Earth Observatory