Thousands of Ghanaians hit the streets of Accra on Wednesday in protest against the recently signed military agreement with the United States government that will give the U.S. military unfettered access to some facilities in Ghana.

The protesters wearing red and black attires marched through the streets carrying placards indicating their disapproval with the controversial agreement that was ratified by the Ghanaian parliament last Friday despite a walkout by the minority.

“Our future is at stake Mr. President”; “Please hear our cry Mr President”; “Ghana is bigger than $20 million”; “Say no to US military base in Ghana”; and “Akufo Addo must go” were some of the inscriptions on the placards. The police established their presence in the capital to ensure security throughout the march. 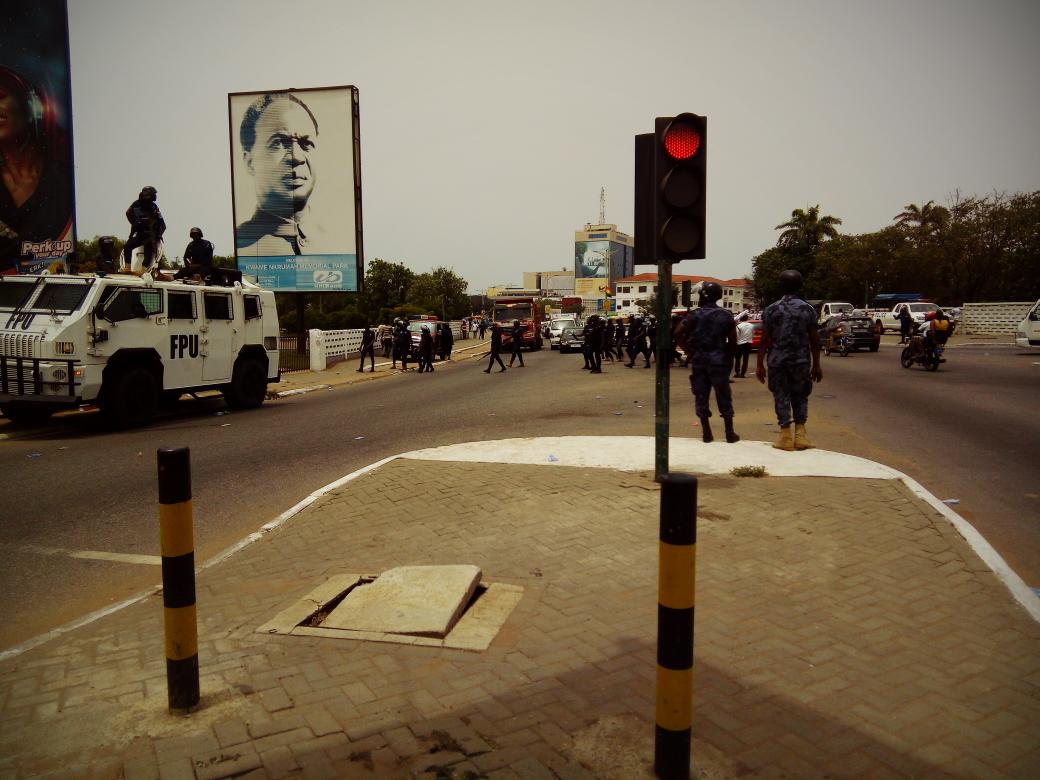 Former Ghanaian president John Dramani Mahama supported the demonstration in a tweet saying: “I join in declaring #GhanaFirst as my compatriots and other democratic forces converge to demonstrate their opposition to the Ghana/US military agreement.”

I join in declaring #GhanaFirst as my compatriots and other democratic forces converge to demonstrate their opposition to the Ghana/US military agreement.

Ghana is expected to get $20 million annually from the agreement which grants the U.S. forces and contractors “unimpeded access to and use of agreed facilities and areas” which will be furnished by Ghana “without rental or similar costs to the United States”.

“United States Forces and Contractors shall not be liable to pay tax or similar charge within Ghana in connection with this agreement” and for imports and exports, they “shall be exempt from any inspection, license other restrictions, customs duties taxes or any other charges within Ghana,” states the 12-page agreement which among others grants the U.S. free use of Ghana’s radio spectrum.

The “secret” agreement was made known to the public last week after it was sent to parliament for approval by Ghana’s Minister of Defence Dominic Nitiwul. The document was published by local news portals last Tuesday.

The agreement was not received well by the Ghanaian public especially after years of denial by both Ghana and the U.S. government that there were no plans to set up a base in the country.

There was a lot of backlash prompting the defense minister to react quickly by denying the reports saying the document is not a secret and the U.S. is not building a military base in Ghana.

The Minister of Defence, Dominic Nitiwul, explained that the document is a “defence cooperation agreement” between the two countries for joint training which involves the use of two building at the Kotoka International Airport.

“This agreement is not the first time and is no different from joint exercises held over the years … I have no authority to grant tax waivers,” he was quoted by the Daily Graphic, adding that the partnership is strategic to strengthen Ghanaian forces against terrorism and terror attacks.

“The United States and Ghana are planning joint security exercises in 2018 which require access to Ghanaian bases by U.S participants and those from other nations when included. We refer all questions to the government of Ghana,” the U.S. embassy added.

Read the agreement below: