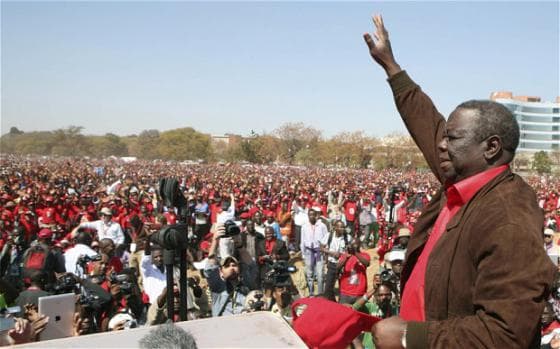 Zimbabwe Prime Minister Morgan Tsvangirai has dismissed Wednesday's election, calling it a "huge farce." He said the results were invalid because of intimidation and ballot-rigging by President Robert Mugabe's ruling party, which is claiming victory.

President Mugabe's ZANU-PF party has claimed a landslide victory in the elections that would secure another five years in power for Africa's oldest head of state. "This has been a huge farce," Mr Tsvangirai told a news conference at his Movement for Democratic Change party's headquarters in Harare.

"In our view, that election is null and void,".Mr Tsvangirai said.

Releasing unofficial results early in Zimbabwe is illegal, and police have said they will arrest anybody who makes premature claims about the result. Election authorities were due to announce results by 5 August.

But a senior source in Mr Mugabe's ZANU- PF party, who asked not to be named, said the outcome was already clear. "We've taken this election. We've buried the MDC. We never had any
doubt that we were going to win," the source told Reuters by phone.

Riot police took up positions outside the party's headquarters in central Harare and other key locations in the capital. MDC offices appeared to be almost deserted. An independent election monitor in Zimbabwe, who also could not be named for fear of arrest, said early results were looking like a "disaster" for Mr. Tsvangirai, who was making his third bid to unseat 89-year-old Mr Mugabe.

Responding to the ZANU-PF claim, a high- ranking source in Mr. Tsvangirai's MDC party described the election as "a monumental fraud".

The MDC will hold an emergency meeting later today.