Last month, Face2Face Africa reported on how the young couple became an Internet sensation with the simplicity and unpretentiousness of their wedding ceremony. 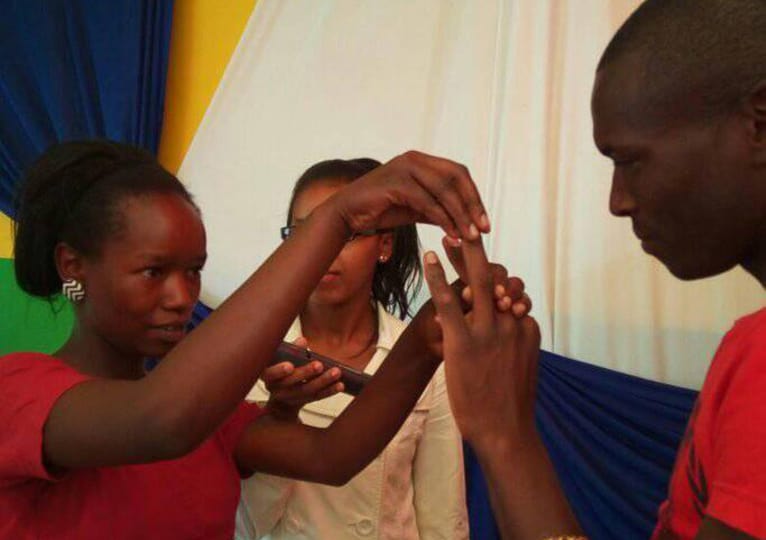 The couple getting married in their original ceremony. Photo Credit: eDAILY

Wambui, 24, and Mutura, 26, officially took their wedding vows on Sunday, January 22, in a remarkable ceremony that cost less than $1.

Mutura, the groom, said the amount was basically all they could afford, explaining that the $1 went in to buying the symbolic rings with which they exchanged their vows.

The couple were quite happy to marry without the usual bridal train, exclusive venue, or expensive decoration and were both casually dressed in jeans and matching T-shirts as they were joined together after Sunday service in church in one of Nairobi’s suburbs.

Tuesday’s Valentine’s wedding party for the couple, however, had the trappings of a Hollywood wedding. The happy couple arrived in a black Cadillac Escalade to a venue decorated by organizers in red, blue, and white.

They repeated their wedding vows, exchanged wedding rings made of pure gold, danced to their heart’s content, and then cut a 5-tier cake with two extra cakes on the side in a ceremony attended by family and friends.

After the lavish ceremony, the newlyweds are set to go on a one-month all-expenses paid honeymoon in Dubai, courtesy of the organizers.