Fans of North London football club, Arsenal, were disgusted by a comment shared on Instagram by the club’s ambassador and Bollywood star Esha Gupta, which compared Nigerian football star Alex Iwobi to a gorilla. 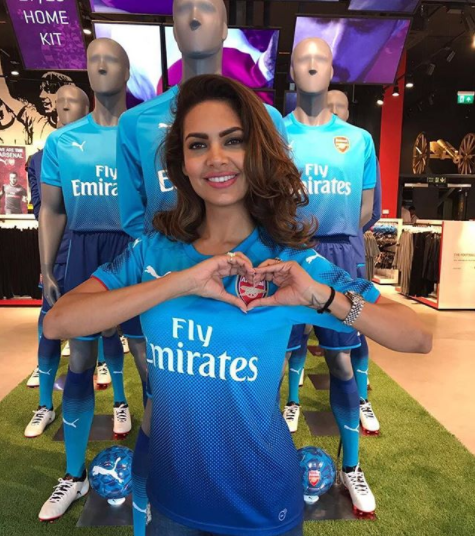 The apologetic Esha Gupta shared a screenshot of a WhatsApp conversation to her 3.4 million followers on Instagram on Sunday bearing a message she received from a Varun_Gupta17 which read: “Solves our winger issues. I can’t see that gorilla faced Iwobi running down the flank again. He’s so bad ya.”

“Hahahahahaha I honestly dunno why they don’t bench him more,” she replied and Varun_Gupta17 responded: “It’s like evolution stopped for him. Didn’t change from Neanderthal to man.” 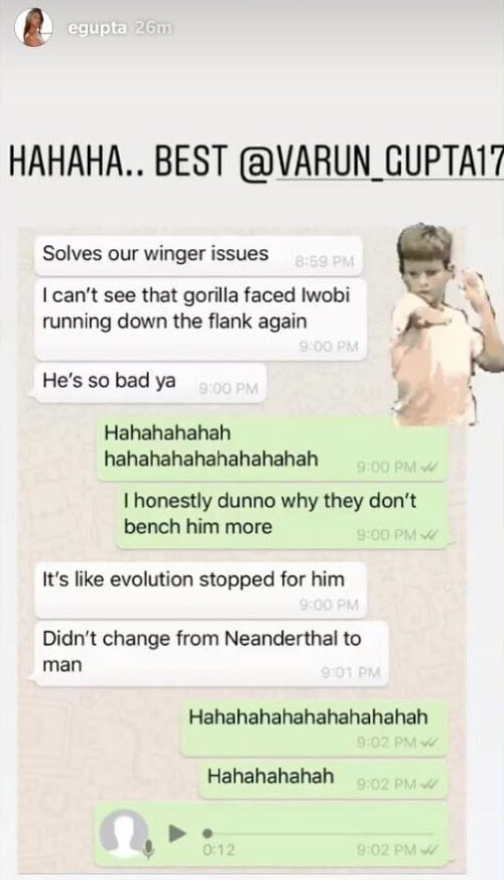 Despite quickly deleting the message after a backlash, fans of the team screenshotted the racist post and called her out on Twitter while demanding the sack of the Indian actress and model.

“Guys I’m sorry you thought it was racist. Was bad on my part, being a sports love, Wallah meant it. Sorry guys forgive the stupidity,” she tweeted her apology.

Guys m sorry you thought it was racist. Was bad on my part, being a sports lover. Wallah never meant it. Sorry guys forgive the stupidity ?? #gooner4life

She added: “It was us discussing our frustration during the game.sorry as I din realise it directed towards racism.laughed over the spur of the moment, which was the games result guys.been victim of racism myself before. But this is not something m proud of. It was a fault,sorry guys.”

It was us discussing our frustration during the game.sorry as I din realise it directed towards racism.laughed over the spur of the moment, which was the games result guys.been victim of racism myself before. But this is not something m proud of. It was a fault,sorry guys

Her apology rather infuriated more supporters who urged the club to take action. Below are some of the thousands of reactions from social media.

I’m extremely proud to be a supporter of a club that has historically been at the forefront of the fight against racism and homophobia that are so prevalent in the game even today. You’ve failed that legacy. You need to resign. You’re no ambassador for our club’s values.

She doesn’t need to resign…. She needs to be booted OUT!!!

See now, we don’t want to kill you over it but the fact that you could laugh at him being called gorilla faced and then uploading it on spur of the moment, being the ambassador of the club isn’t worth an apology. That is actually the worst thing you could do for the Indian fanbse

Your response is embarrassing! You state on one hand you’ve suffered racism yet on the other have no idea that you’ve made a racial slur! Your ignorance and arrogance of this whole situation is beyond words! Please remove gooner from your profile! Your not part of our club/family

Arsenal have spent years working on kicking racism out of football. Wright, Vieria, Campbell, Henry some of the clubs greatest players are black and your actions degrade them all. You have no business being in football. Resign.

On a footballing note,Iwobi was one of our best players,after he came off we didn’t create any serious chances anymore. Getting frustrated w/ his lack of end product is understandable but stooping that low & abusing him is disgusting,football isn’t the game for you or your friend

Pretty lousy apology. As a matter of fact, it does not sound Ike an apology.

@Arsenal Fire her Arsenal. This is unacceptable.

Please, please educate yourself if you’re going to try to represent anyone. This is literally your most basic duty as an “ambassador” of anything. This should prompt serious lifelong self-reflection and permanent embarrassment on your part. Absolutely ridiculous.

We thought ? Calling a black person “gorilla” and you didn’t know it was racist ? How did you even end up in the kit of @Arsenal ? You see a fellow human being as animal? Poor

“Sorry you thought it was racist”

I guess saying Iwobi had a gorilla face and hadn’t evolved was misinterpreted by us, the reader. Our collective mistake. If we hadn’t all misinterpreted that as racist then it would be fine, right?