Bride price in Africa, the sum or property paid by the groom and his family to the parents of the woman (bride) to-be married remains one of the major means of formalizing traditional marriages. Since time immemorial, the practice has been one of the highly respected norms even among modern, educated Africans. Typically, bride price consists of a contractual agreement where material items (often cattle, pigs or other animals) or money are paid by the groom to the bride’s family in exchange for the bride, specifically for the labour she will provide to the new household and her capacity to produce children. In recent times, Uganda’s High Court legalized the payment of bride price in the country, thus making it a legal mandate and prerequisite of all heterosexual marriages.

Concerns have been raised over the manner in which the bride price has been overly inflated; most African cultures are said to see the practice as a show of wealth rather than the expression of love.

Historically, the payment of  bride price was about the prospective husband compensating the parents of his wife-to-be for their loss of her manual labour. This kind of labour was thus supplemented with small cash payment and drinks. However, this practicely has been transformed hugely in the advent of Africa’s cash economy. In fact, should the man fail to pay the bride price, his prospective wife gets recalled until the husband fulfills his obligation. Some families even pray the courts against the husband in order for him to recover such payments.

In Zimbabwe, for instance, daughters are now a high-priced commodity. The bride price has become a means of escaping poverty as parents demand huge sums of money from their in-laws.

“When people are mired in such hunger as we have been seeing in this country for over seven years, they will do anything to survive, especially demanding for high bride prices,It is not surprising that many parents are looking to the bride-price as one way to make ends meet. Unless the economic meltdown is addressed, we will continue to see parents commodifying their daughters,” explains Innocent Makwiramiti, an economist based in Harare, Zimbabwe.

In South Africa, bride prices are being translated from traditional values to hard currency  by setting the cost of cattle payable by cash ranging from a symbolic R100 ($14) to the current market price of R3 000 ($420) and then multiplying that amount by the number of cows the new bride is deemed to be worth. This development has raised concerns among South Africans like Thabo Seekane:

“It was something that was pre-determined, years in advance by the family. The problem with today is the conversion of cattle into cash. This conversion becomes a personal thing and very subjective,” he lamented.

In West Africa, the cost involved in getting married is feared to have encouraged many a young men to stay away from marriage. In the case of Nigeria, prospective bridegrooms pay unbelievable amounts of money based on the state they are coming, just as part of tradition to getting married. This is a clear example of how much one is expected to pay in a typical Edo State bride price: 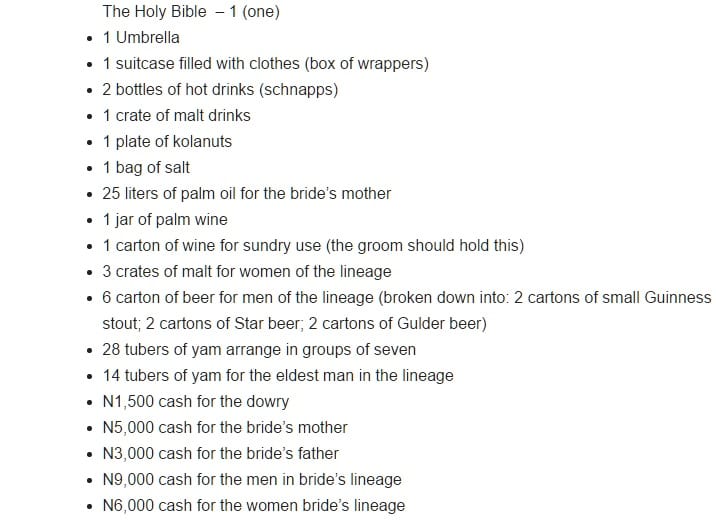 The question thus remains whether the process of marriage in some parts of Africa is a money-making venture or an expression of love.