Born Malcolm Little in Omaha, Nebr., the future leader’s parents, Earl and Louise, lived modestly. The elder Little was a Baptist preacher who considered himself a student of the Pan-African philosophies of Marcus Garvey. According to some accounts, Earl Little was also a member of the Universal Negro Improvement Association (UNIA) and that affiliation put his family at risk. Eventually, the Little family relocated to Lansing, Mich., where Malcolm’s father often clashed with White supremacists.

Mr. Little was killed when Malcolm X was six, a death largely speculated to be a planned hit by White hate groups who wanted to silence the preacher. Even as a man, Malcolm X doubted the story that his father committed suicide. Later, his mother would become pregnant and placed in a mental hospital, suffering a breakdown. From there, Malcolm X and his siblings were shuffled to various foster homes.

A junior school dropout despite being an excellent student, Malcolm X headed to Boston at the age of 14 to live with his half-sister. For seven years, he worked a variety of odd jobs. After returning to Michigan, he moved to New York in 1943 and became entrenched in the crime scene in Harlem’s bustling borough. Engaged in a variety of crimes, including selling drugs and robbery, Malcolm X was also an associate of legendary Black comic Redd Foxx in those times. In 1946, Malcolm X was arrested in Boston for attempting to steal a watch and was given an eight- to- 10-year sentence.

Prison was a transformational moment for the future leader, and his meeting with fellow inmate John Bembry instilled in him a love for reading. At the same time, Malcolm X’s siblings began to write him about a burgeoning religious group known as the National Of Islam (NOI), which preached a brand of Black pride not unfamiliar to him but that he largely shunned. It wasn’t until his brother, Reginald, began to tell him how the NOI’s teaching could liberate him did he begin to tune in.

Corresponding with NOI leader the Hon. Elijah Muhammad, Malcolm X chose the “X” surname as many Black Muslims did to signify the eradication of their “slave name” or given family last name. From there, Malcolm X’s rise in the NOI was imminent.

Free from prison on parole, Malcolm X made his first visit to meet Muhammad in 1952. Charged to expand the NOI’s influence among Black Americans, Malcolm X established his minister roots at Temple No. 1 in Detroit before heading Temple No. 11 in Boston on his own. Later, and most famously, Harlem’s Temple No. 7 is where he became a controversial and outspoken figure.

The NOI’s teachings were radical and blasted White supremacy and racism that permeated the air in the 1950s. With a fearless bent and articulate wit, Malcolm X challenged the power structure with unwavering confidence coupled with the fiery rhetoric of Black revolution, becoming a galvanizing force in Black America.

The FBI, worried about his command of the people, began to spy on Malcolm X and his family. 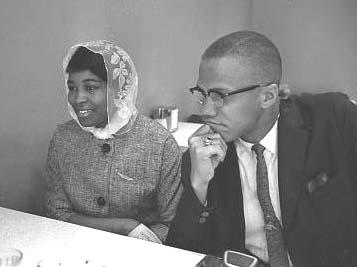 Malcolm married Betty Sanders (pictured left), a young NOI member, in 1958. He and Mrs Shabazz went on to have six daughters.

Malcolm X’s teachings made him a hero among Blacks and an enemy of Whites. His pro-Black agenda contrasted greatly with the snivelling image of meek people of color cowering under the veil of powerful whites; thus, he continued to rise as a popular media figure and speaker.

Unfortunately, police officials, along with the FBI, began to infiltrate the NOI’s inner circles in order to usurp the powerful leader and cause dissent within the ranks. By 1963, Malcolm was a dominating force but his comments on the assassination of President John F. Kennedy and his speculation on government-sponsored killings contrasted greatly with NOI’s view of things.

Other tensions began to arise between Malcolm and Elijah Muhammad. Some suggested that the leader began to eclipse his spiritual father, but there was also some insidious practices that clashed with Malcolm’s philosophies. Muhammad was rumored to have carried on extramarital affairs with several of the NOI’s young women. This angered Malcolm and started a larger rift after the group silenced him from speaking publicly. 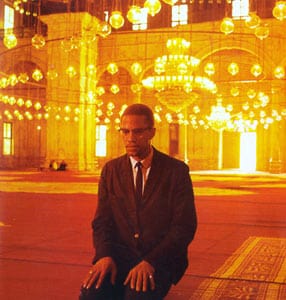 Founding the Organization of Afro-American Unity, Malcolm would expand his social and political circles by working with a wider group of Pan-African advocates and civil rights leaders. That same year, he stepped down from the NOI. Malcolm X briefly met with Martin Luther King Jr. at a Senate hearing over the impending Civil Rights bill. During this time, Sunni Muslims began to meet with the leader and he eventually converted to orthodox Islam.

Making his pilgrimage to Mecca in Saudi Arabia just a month after leaving the NOI solidified his new worldview once he saw Muslims of all races worshiping in the same spaces. Now officially known as El-Hajj Malik El-Shabazz, he returned to America with a renewed sense of purpose. 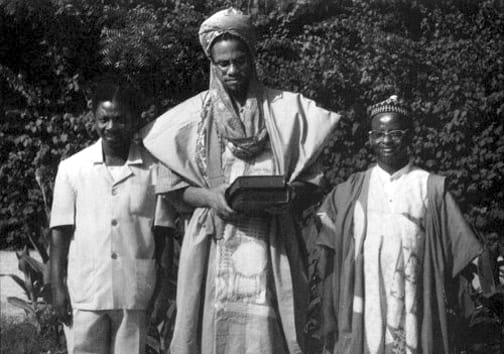 Malcolm X dressed in traditional West African garb on a trip to Africa.

El-Shabazz also traveled the world, meeting with African leaders who wanted the striking speaker to serve in their government and also continued speaking engagements across America with the Muslim Mosque, Inc., and Organization of Afro-American Unity groups.

Seen as a traitor by the NOI, El-Shabazz began receiving death threats and the like. Current NOI leader Louis Farrakhan reportedly asked for his former ally’s head. Farrakhan even wrote in the NOI’s newspaper “Muhammad Speaks” that El-Shabazz deserved death. By this time, the FBI had fully integrated itself within the NOI and employed several informants.

On February 21, 1965, El-Shabazz was speaking at an Organization of Afro-American Unity at Manhattan’s Audubon Ballroom. Suddenly, a group of men rushed the podium, blasting weapons. El-Shabazz was shot several times and was pronounced dead after arriving at a local hospital shortly after.

The gunman was NOI member Talmadge Hayer along with two other accomplices, Norman 3X Butler and Thomas 15X Johnson. All three were later convicted. 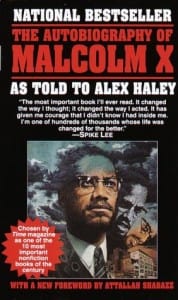 The death of El-Shabazz raised concerns across the country for leaders such as King and shocked the world considering El-Shabazz was such a beloved leader. Despite his intense speeches in the past and call for racial separatism, El-Shabazz became known as a champion of human rights from the moment he split with the NOI.

The legacy of El-Shabazz is best captured in the posthumous publication, “The Autobiography of Malcolm X: As Told to Alex Haley” (pictured), which was released in 1965. Capturing his entire journey from his early days of crime to spiritual enlightenment, the book serves as the most complete account of the life of Malcolm X.