It was another historic day in Lagos, Nigeria’s commercial nerve centre, a couple of days ago when Congolese poet and novelist Fiston Mwanza Mujila won the 2015 Etisalat Prize for Literature. He clinched the award with his first novel, Tram 83. Originally written in French, Tram 83 was translated into English by Roland Glasser and published by Deep Vellum. 35-year-old Mujila is the first Francophone writer to win the prestigious Etisalat, the first ever pan-African prize that celebrates debut fiction books by African authors.

The Etisalat Prize for Literature aims to serve as a platform for the discovery of new creative talent from the continent and invariably promote the burgeoning publishing industry in Africa. By recognizing and celebrating writers and other members of the literary community across Africa, Etisalat plans to bring some much needed awareness and acclaim to new fiction while also applauding and rewarding the efforts of those who have distinguished themselves in the craft in recent times.

The Prize wholly embodies this vision, bringing together celebrated writers, critics, academics and book lovers from across the continent and beyond in order to give credence and honour to “home-grown” talent while also rewarding new entrants and encouraging further participation in this area.

Born in 1981 in Lubumbashi, Democratic Republic of Congo, Mujila studied Literature and Human Sciences at Lubumbashi University. He now lives in Graz, Austria, and is pursuing a PhD in Romance Languages. He has won many accolades for his writing, including the Gold Medal at the 6th Jeux de la Francophone in Beirut as well as the Best Text for Theater (State Theater, Mainz) in 2010. His writings are a response to the sociopolitical turbulence of post-independence Congo. 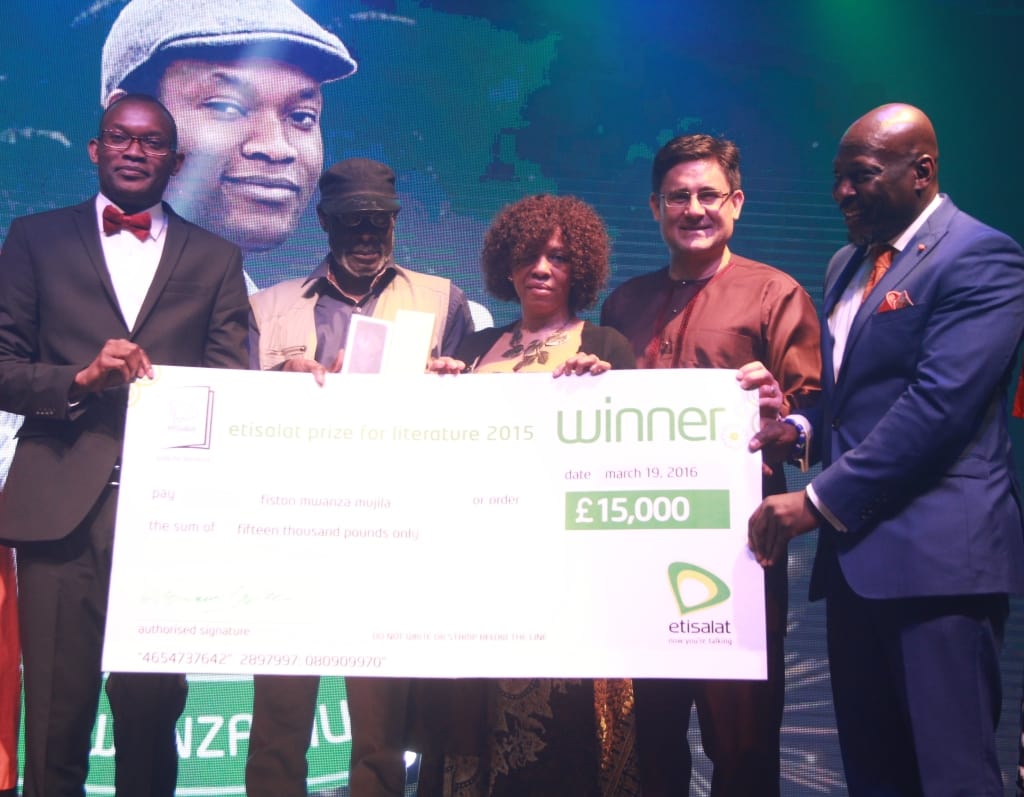 Tram 83 is the first novel by a DR Congo writer to be translated into English in over two decades. The novel centres around Lucien, an idealistic writer sucked into the dystopian world of his friend, Requiem, a gangster who reigns supreme in the outrageous, extravagant and glamorously debauched nightlife of a secessionist City-State. The Tram 83 of the title is a nightclub that forms the heart of the crumbling city, in which Requiem and a cast of colourful characters feast.

The judging panel for the 2015 Etisalat Prize for Literature was chaired by Ato Quayson, Professor of English and inaugural Director of the Centre for Diaspora Studies at the University of Toronto. Also on the panel were writer and editor, Molara Wood, and Zukiswa Wanner, author of Men of the South and London Cape Town Joburg.

Quayson made the announcement during award ceremony at the Intercontinental Lagos Hotel. The ceremony was also broadcast live on Hip TV and live-streamed on the internet. Over 30 million people across Africa tuned in. Mujila was presented with a £15,000 cheque, an engraved Montblanc Meisterstück and an iPhone 6S. He will also have the opportunity to attend the Etisalat Fellowship, worth £13,000, at the prestigious University of East Anglia, United Kingdom, under the mentorship of Professor Giles Foden.

Speaking at the award ceremony, the Chief Executive Officer (CEO) of Etisalat Nigeria, Matthew Willsher, expressed the joy and delight of the management and staff of the company over another opportunity to celebrate the richness and strength of African literature. The Etisalat Prize for Literature, according to him, bears out this year’s theme, “Representing the Diversity of African Voices.”

Diversity is somehow wonderful in its own right, but its importance is not for its intangible beauty, it is that diversity is a huge source of innovation. Africa’s diversity is increasingly recognised as it brings new approaches to world literature while innovation is very important in the literary world, he said.