Despite the trials and tribulations that Uhuru Kenyatta’s government has gone through since its inauguration in 2013, one thing has kept even their worst critics tight-lipped: the First Lady’s unwavering desire to save Kenyan mothers and children. Over the last two years, Her Excellency the First Lady Margaret Kenyatta has been spearheading a humanitarian initiative which aims at reducing maternal mortality rate in the entire country. Dubbed the “Beyond Zero Campaign,” it will provide fully-equipped mobile clinics to all of Kenya’s 47 counties.

During the campaign launch in January 2014, the First Lady reiterated her desire to see mothers in the poorest parts of the country giving birth in hospitals, which would ultimately reduce maternal deaths:

That month, Mrs. Kenyatta ran a half-marathon to marshal support and mobilize resources for the project. In April of the same year, she made history as the first African first lady to finish the 42-kilometer London Marathon in another effort to raise funds for the Beyond Zero Campaign.

Since then she has organized three more half-marathons in Nairobi, Kenya, bringing on board both local and international participants. Her clarion call – “no woman should die giving life”– seems to have won the hearts of many, including a local music band that has transformed the message into a theme song titled “It Has to Be Now.” 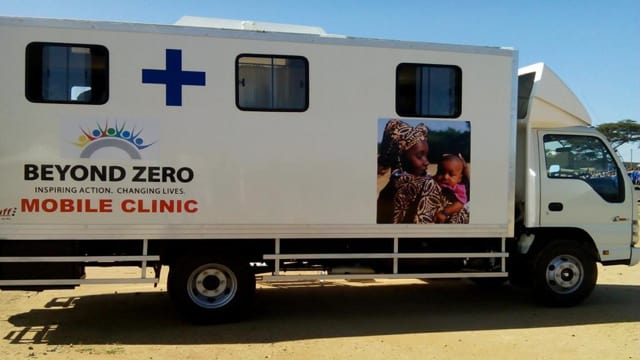 Beyond Zero aims to make these mobile clinics available throughout Kenya. (Photo: monitor.co.ke)

So far, the initiative has managed to acquire 36 fully-equipped mobile clinics, which are now serving millions of Kenyans in remote parts of the country. Previously, pregnant women in these areas had no choice but to give birth at home or walk long distances to access medical facilities.

This initiative has earned the First Lady local and international accolades, including the UN in Kenya Person of the Year award for 2014.

Notwithstanding her calm, timid nature, Margaret Kenyatta has demonstrated the rare ability to identify pertinent problems and come up with simple, realistic solutions. Her tenacity to pursue the cause to a positive conclusion is an important virtue to be emulated by other African first ladies and powerful women in general.