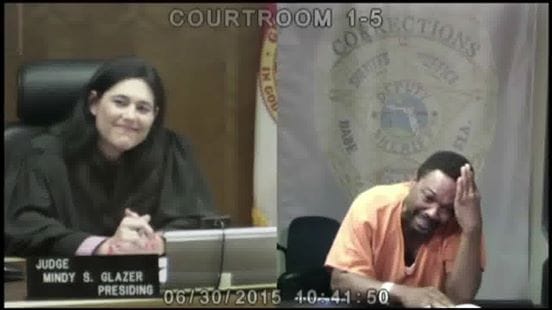 In an unexpected meeting, alleged burglar Arthur Booth and Judge Mindy Glazer reunited during a recent Florida court hearing, with Booth crying at the realization that Judge Glazer is an old friend from middle school.

While 49-year-old Booth was attending his court hearing for an alleged burglary, where police reportedly chased him for his crime, Judge Glazer asks, “Did you go to Nautilus for middle school?”

Moments later, Booth breaks down in tears, with Judge Glazer saying, “I always wondered what happened to you, sir. You were the nicest kid in middle school.”

Speaking to the courtroom, Judge Glazer continues, “He was the nicest kid in middle school. I used to play football with him.”

Re-addressing Booth, who at this point is sobbing uncontrollably, she says, “Mr. Booth, I hope you are able to change your ways….

“Good luck to you, sir. I hope you are able to come out of this OK and just lead a lawful life.”

SEE ALSO: ‘The Tempest’ To Take Flight in Harlem