The 22-year-old beauty queen was participating in Sun International’s Maslow Hotel campaign to prepare and serve hot meals to thousands of people this month at various locations in Pretoria and Johannesburg.

However, the images of Nel-Peters feeding Black kids with latex gloves caused some to accuse her of being racist and afraid of touching Black children:

#demileighnelpeters wears gloves as she meets South African children with HIV. Is her education stuck in the 1980? HIV isn’t passed by touch

Demi-LeighNel-Peters @DemiLeighNP wonder if Miss SA 2017 ever inspire any black child, she had to eat sandwich on covered white hand gloves

Others claim the fashion idol, who is of mixed race, was afraid of touching the kids because some of them have HIV.

On Twitter, some people used the hashtag #MissSAChallenge to post comical pictures of themselves doing ordinary chores while needlessly wearing gloves and nylon paper bags:

#MissSAChallenge studying can be hard when you have to consider hygiene pic.twitter.com/QZSn8pbMlo

However, not all comments were critical. Some people faulted those accusing the beauty queen of racism, saying the outrage was far-fetched:

More faux outrage !! People spend more time being ‘outraged’ at something than actually doing some good in the world #MissSAchallenge

In her reaction to the uproar, Nel-Peters posted a video on Twitter clarifying that she wore the gloves for sanitary reasons and also refuted claims that there were racial undertones to her actions:

To everyone asking about the gloves, I truly hope that you’ll hear my heart and understand that it came from a place of wanting to do good. pic.twitter.com/Pl5amM2gEM

She added that all the volunteers present at the orphanage were required to wear gloves while handling food to ensure good hygiene.

Ultimately, Nel-Peters apologized, saying it was not her intention to offend anyone.

Her team, led by her spokesperson Claudia Henkel, later posted images of her gloveless and playing with the children after the food had been served: 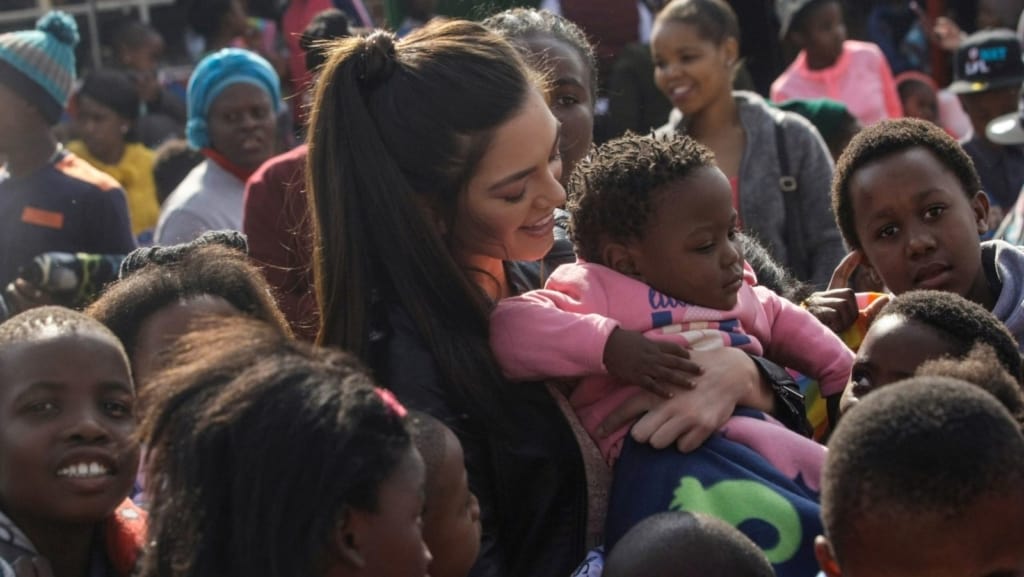 As one of the few African countries with the largest population of White people, South Africa continues to struggle with the ancient demon of racism more than two decades after the end of Apartheid.