It’s impossible for a car to be driven without wheels or a plane to fly without wings. In the same sense, a doctor with no medical supply cannot maximize his/her abilities, and a chef with no ingredients, cooking utensils, or an equipped kitchen is not able to produce what he has become a master at producing. It is the same way that students with the absence of classroom furnitures and bare essentials such as paper are not going to have the chance to reach the heights they are capable of reaching. 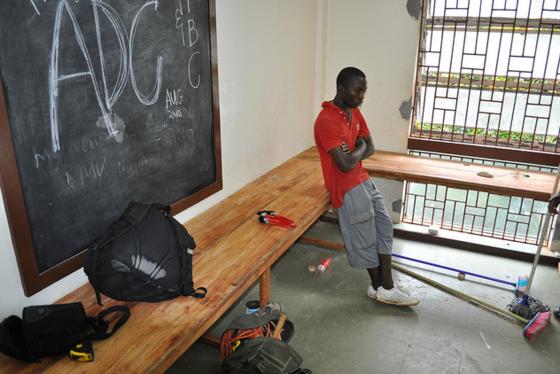 On August 11th, 2011 BBC Africa reported that students at Sierra Leone’s well respected Fourah Bay college were “unable to take their final exams because of a lack of paper.”

But perhaps this was a fluke, a rare event that under usual circumstances would be thought to never repeat itself. But just in February of 2011 a similar occurrence took place. Exams that covered first semester material were delayed by two weeks because classrooms lacked the necessary furniture for these tests to be held.

One student belonging to the college described the situation as “a shame to [their] society.” Another student, activist Siman-Allie Mans-Conteh, commented on the matter stating “I'm very disappointed that Fourah Bay College, once the Athens of West Africa, is faced with this embarrassing situation.”

Shame and embarrassment have been emotions used to describe this situation but shock isn’t one of them. According to BBC Africa it’s not a rare sight to see students standing outside of their respective classrooms trying to learn the day’s lesson or finding professors holding lectures outdoors.

The college complains that the central government does not allow them to increase fees and as a result, the school charges students low tuition ranging from a mere $200 to $800 per year. So where does the fault lie and who must be held accountable? The question is in the air along with the disgruntled murmurs and chatter from students who are simply seeking an education. These students feel cheated and robbed of organization and effectiveness from school authorities and management that could possibly restore the good name of Fourah Bay college.

How can we expect to see a brighter Africa on the horizon if we can’t even keep on the lights in the classrooms being used to train and prepare those in whose hands the future of Africa lies? We must look at situations such as these and challenge ourselves and our schools to do better.