Neutral hues never go out of style. They are easily attainable and flatter every skin tone.  The latest Vogue US fashion spread titled “No Limits” features Moroccan/Egyptian model Imaan Hammam and Moroccan model Nora Attal shot in the ever sandy views of Zagora, Morocco.  Let’s explore this further.

The looks featured in the latest Vogue masterpiece are flowy dresses, bold prints and textured material.

The middle eastern influence is apparent as the models are clothed in modest wear and head coverings. 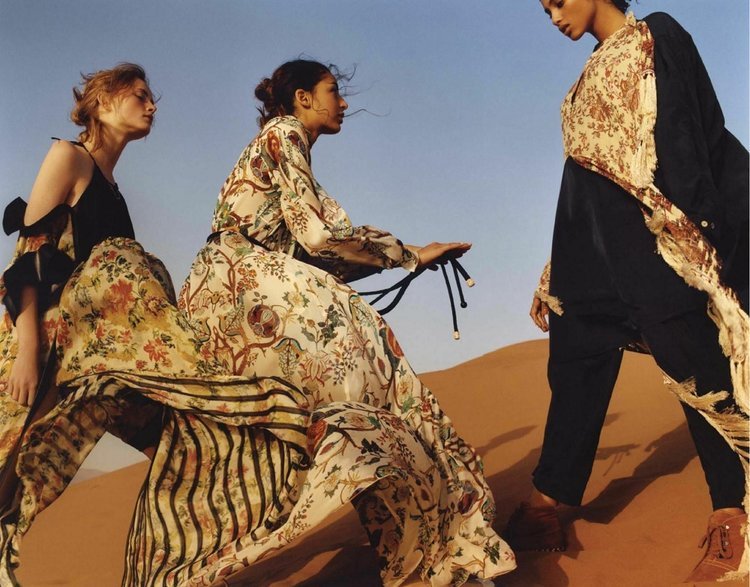 Vogue US “No Limits” for March 2018 issue…Anne of Carversville

Imaan Hammam is a 21-year-old Dutch model of Egyptian and Moroccan descent.  Discovered in 2010, she has since appeared in Vogue, Numèro and i-D.  She affirms “I’m half Moroccan, half Egyptian, and I was born in Amsterdam. I’m Muslim, and I’m superproud of my heritage and of my roots. I want to be a role model for young girls who are struggling with racism or struggling with their looks or with their skin color. I had Naomi Campbell, who I looked up to as a black powerful woman. But there aren’t many Arabic models, and being an African-Arabic model, I’m trying to open doors for more Arabic girls.”

Nora Attal is an 18-year-old British native with Moroccan roots.  Modeling professionally since June 2016, she’s already done runway shows for Dior, Valentino and Sonia Rykiel. She’s also appeared on a cover of British Vogue.  A great example of beauty and brains, Attal explained to Vogue Arabia, “I’m taking a gap year, but after the year I will return to studying, starting a criminology and psychology degree in London.”

African influence is everywhere and highly sought after.