The Emirates air hostess who fell from the emergency exit of a Boeing 777 on Wednesday after the plane landed at the Entebbe International Airport in Uganda has died of her wounds.

The woman reported to be a Bulgarian national was confirmed dead by the public relations officer of the Kisubi Hospital who spoke to local media portal Daily Monitor.

“Yes, we received her but she was already dead. We confirmed her death and she was taken away by the CAA ambulance that brought her,” he was quoted by the Daily Monitor.

The Emirates crew member sustained serious injuries after the fall which occurred while they were preparing to board passengers departing for Dubai, Emirates spokesperson confirmed the incident to Dubai-based Khaleej Times.

The cause of the incident is unclear, however, local Kenyan media Daily Nation reported that the Bulgarian national had attempted committing suicide as she jumped off the plane with a glass bottle which she had initially attempted to stab herself with.

“She had been seen holding what looked like a glass bottle under her chin before she made the fall. Other witnesses said they had seen her in a verbal exchange with colleagues as they boarded the plane,” the report added.

She is reported to have sustained cuts on her knees and body from the glass bottle she jumped with.

A Ugandan civil aviation authority press statement said: “she appeared to have opened the emergency door and unfortunately fell off … The circumstances leading to the incident are being investigated by the relevant authorities.” 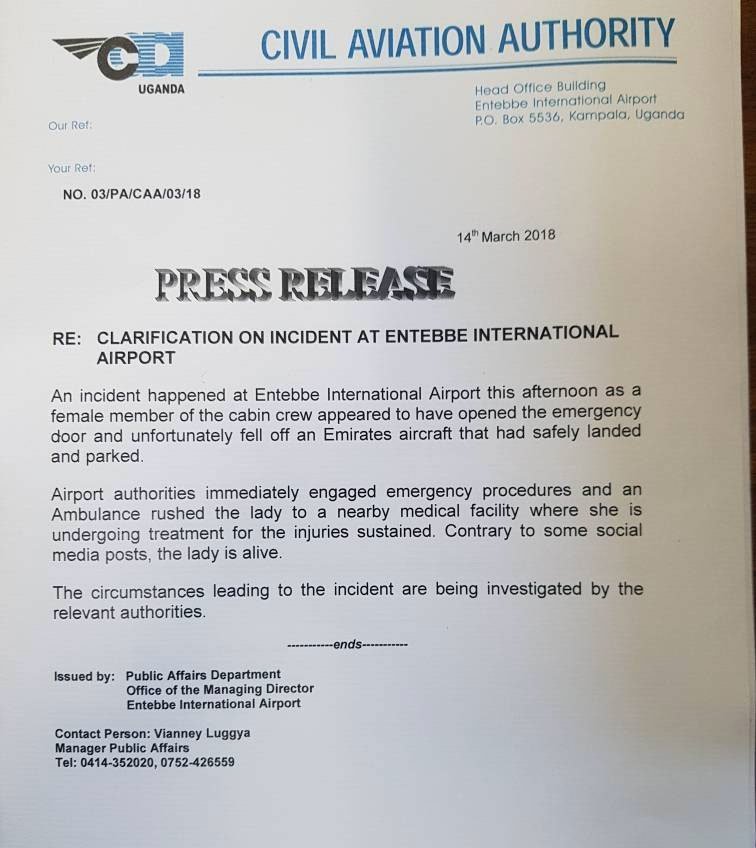