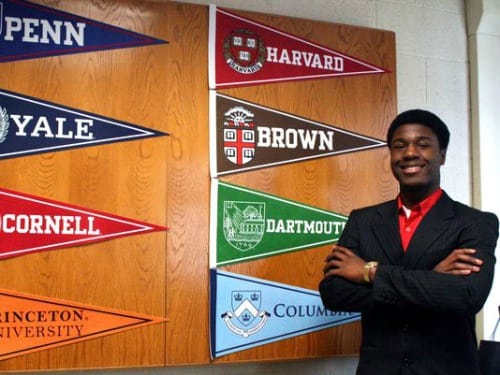 New data suggests that Harvard University, one of the top Ivy League higher learning institutions in the United States, is admitting high numbers of Black students. This comes on the the heels of encouraging reports that African-American students — and especially African immigrants — are being accepted to Ivy League schools.

According to a publication in the Journal of Blacks in Higher Education, Harvard’s class of 2018 will be 12 percent Black, the largest representation of that group in the university’s history.

That will translate to roughly 170 new Black students this coming fall. Overall, Harvard accepted around 2,000 students from a pool of more than 34,000 applicants.

Earlier in the month, Face2Face Africa reported on the exceptional performance of Ghanaian immigrant Kwasi Enin (pictured) of Shirley, N.Y., who managed to get accepted to all eight Ivy League schools, including Harvard University. He scored 2,250 out of 2,400 on the SAT, placing him in the 99th percentile for all students taking the exam.

Then there was the success story Of Akintude Ahmad, a down-to-earth Black American student who also got accepted in to Ivy League universities, such as Yale, Columbia, and Brown.

While Enin has not revealed which university he  is going to attend, if he picks Harvard, he  will at least be a part of a growing minority.