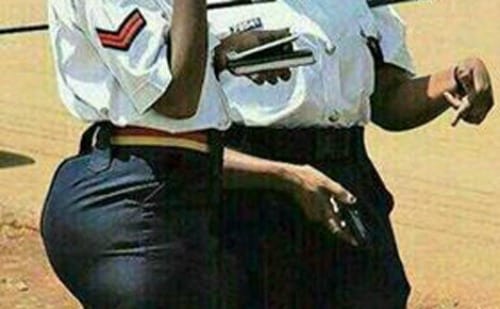 Corporal Linda Okello (pictured), a Kenyan policewoman, was reportedly reprimanded by her seniors over her tight uniform. The picture instantly went viral and was met with social media outrage.

According to the Standard Media, Okello, a traffic police officer based at Kiambu police division,

was summoned by the local county Commander James Mugeria and reprimanded over her dress code, which was deemed indecent.

Officials in Kiambu said the summoning was procedural and the officer had been allowed to go on with her duties.

“The county commander called her for a warning over the pictures that have circulated widely showing her in a tight skirt. It was a normal issue and she was informed to start dressing well,” said a senior police officer aware of the incident.

The officer was on duty over the weekend when she was photographed together with her colleague.

The information on the reprimanding attracted outrage on social media with some posters saying her crime was to wear a small skirt and others protesting she was being unfairly punished.

“Her dressing is a disservice to herself, to the image of the police and to the policewomen trying to be respected for what they do. There is honour in the uniform and what she was wearing was in no way honouring that.” — Mariga Wang’ombe

“You can’t disregard body structures when on comes to issuing uniform. I blame the providers of Police Uniforms  because Linda did not buy the skirt herself.” — Nimmo Mary

“It’s too tight for service delivery to the public. Linda Okello’s authority will not be well respected especially by men.  She needs to request a looser fitting skirt or trousers like her partner there.” — Evans Cheruiyot

“The policewoman who was wearing a uniform provided by the government is being targeted by superior officers for a crime which is not her own.”  — Robert Alai

In a circular issued last July, the officers were told some items of clothing and accessories were tarnishing the good name of the service.

The circular warned that any officer found with the banned items will have breached Force Standing Order CAP 37 and the National Police Service Act 2011 Section 87-88 and will be liable to punishment.

“Issues of Police misconduct were raised and the most noticeable one was a matter on how some of the police officers wear uniform. It was noted with a lot of concern that male police officers wear different types of socks, unmarching [sic] long trousers, coloured visible vests and bangles among other metals, whereas women officers have dreadlocks, “Afro” hair, big earrings, unnecessary bangles, and lipstick. Fashionable wear is only good when one is on leave,” the circular signed by Leo N. Ijora on behalf of Kaindi said.

“It is a misconduct whose consequences calls for stern disciplinary action. You are directed to adhere to the laid down dress code as stipulated on FSO CAP 37 and National Police Service Act 2011 Section 87-88 with immediate effect,” the circular read.

What do you think?