The N’ko Language, developed by Guinean writer and inventor Souleymane Kante was first introduced to his people as a script on April 14, 1940. The language was invented for the Mande speaking people and is currently used in  Guinea, Mali, Cote Ivoire and some parts of Cameroon.

Souleymane Kante was born in Guinea on the 23 November 1922. As an avid reader, he read greatly on African cultures and history until he began to write himself. Kante’s father, Amara Kante, owned a Muslim school and educated his son himself until his death in 1941 when Souleymane was only 19 years old. After the death of his father, he moved to Cote d’Ivoire and stayed in a small town called Bouake where he worked as a trader and continued his reading and writing.

It was during a reading escapade that Kante was moved to invent the N’ko Alphabet. The idea was sparked when he was angered by a comment he read in a book by a Lebanese writer who compared the languages of the African people to that of birds stating that they were impossible to transcribe into written form without the use of Western alphabets.

Before his new development, many languages in Africa including the Mande language used Latin alphabets or Arabic to transcribe their languages.

This was not the first time that Kante had come across such racist comment, however, having had enough of such derogatory talk against his roots, he decided to do something about it thus develop the N’ko Alphabet.

The alphabet was to prove that African indigenous languages could be transcribed without western influence and to give the Mande speaking group in West Africa a form of script that could help record history in native languages, protect their culture and identity. 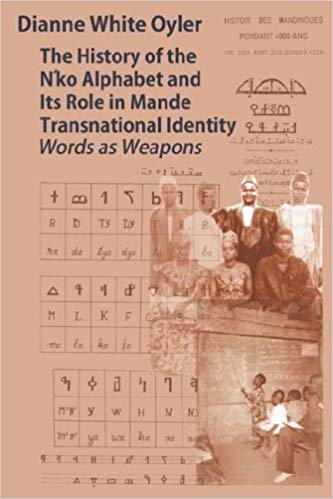 The History of the N’ko Alphabet and its Role in Mande Transnational Identity: Words are Weapons

In the book, The History of the N’ko Alphabet and its Role in Mande Transnational Identity: Words are Weapons, historian author Dianne Oyler explained that many accounts state that Kante spent several years working on the N’ko scripts first by studying the Arabic alphabets and Latin alphabets to create the N’ko Alphabet for the Manding people. He later abandoned the idea of using the two as a foundation and developed the N’ko from scratch without any external influence.

The alphabet has seven vowels, nineteen consonants and a nasal character “N”. The script also came with eight accent sounds that are placed above the vowel to mark the length in pronunciation. In addition, Kante also developed punctuation marks and numbers.

Kante realized that the Mande speaking people and villagers made number counts from left to right thus designed the language to be written from right to left.

After the development of the script and its introduction, Kante spent the rest of his life teaching the language in order that it becomes part of the people of West Africa in the long run. He dedicated his time to translate works using the N’ko alphabet, the first being the Quran which continues to be produced. It is recorded that he translated more than 700 books.

After the independence of Guinea, Kante returned to Guinea with the hopes of getting the language adapted but the vision never materialized.  Kante also spent time writing books on astrology, history, religion and economics until he died in 1987.

N’ko in Mande languages means “I Say”, and today the language has been accepted into the Unicode system for computers to display the script. There are a few newspapers and books that have been written in N’ko in Cote d’Ivoire and Guinea.

Photographs of Souleymane Kante were not available as at the time of writing this article.