Belly dancing, the quick and complex evocative movement of the hips in rhythm, is a distinct and fascinating dance, originated by the women of the Ouled Nail tribe of Berber culture in present-day Algeria before they were Islamized in the 7th century. At childhood, most Nail women specialized in the art of music and dance and commonly settled in nearby cities as entertainers.

Nail women adorned in gold embroidered attire with gold girdles and countless gold chains and pendants, and they danced to a style of music known as “Bou Saada” which means “place of happiness”. 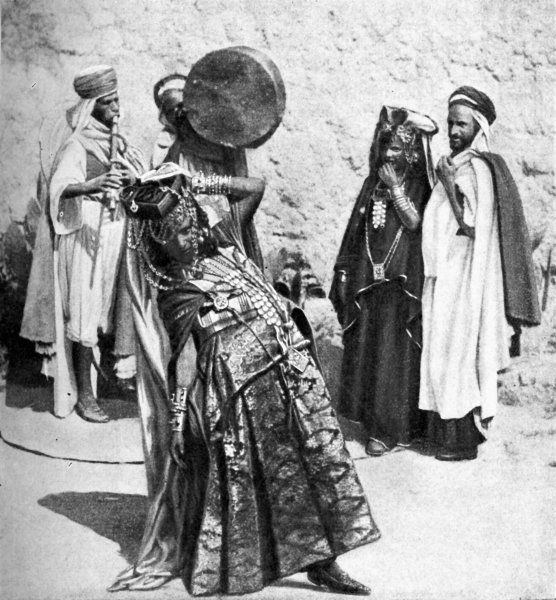 As adolescents, the women of Ouled Nail went down into the cities to dance and entertain men as well as warm their beds. They weren’t coerced into practising dancing and prostitution, it was common and more so, a part of their tradition which runs in their families. As children, daughters studied the art of eroticism and dance, and moved further into the cities escorted by their mothers or aunts to make a living for themselves.

They made seasonal trips home to visit their families and as they aged, looked out for younger girls who had equally been trained in the art to take along on their trips to the city. They return to their homeland after about fifteen years of work in the city, during which, they would have acquired wealth from dancing, to settle down.

Ouled Nail women in a bid to get married, buy a house and a garden and start accepting suitors in order to start a family and when she gives birth to her own daughters, trains them in the art of belly-dancing to prepare them for work. A classic Nail woman ready for work wears a layered dress with pointed bracelets which could be used as weapons, and a necklace made from the coins she has earned.

Belly-dance was not only a part of their culture, it was a means of livelihood and empowerment for Nail women and it is believed that they enjoyed freedom than most “liberated women” enjoy today; because their men understood and appreciated their means of livelihood.

Nail women danced erotically and in some shows, naked. They smoked and gave themselves away with full backing from their mothers. They took in children born out of wedlock from this practice and appreciated it the more if they were girls.

Nail women maintained this aspect of their culture even after they were converted to Islam in the 7th century AD through to the 20th century when French mercenaries during the French Occupation, treated them as subhuman; sometimes killing them for the coin jewellery they wore.

Their fame spread across Europe after French tourists were awed by their outstanding dance, and enjoyed their company in the 19th century. The dance later spread to parts of North America in the 20th century.

Aisha Ali, an expert in the dances of North Africa, observed and recorded a small group of Nail belly-dancers still performing in Bou Saada in the 1960’s. The photographs of this group and the recording, titled “Music of the Ouled Nail” were imitated by American dancers since the 1960’s till date.