A mother living in Baltimore, Maryland shared photos of herself in a hospital and her story on Facebook last Thursday of how an intrauterine device (IUD) birth control inserted in her three years ago almost cost her her life in November 2017 after it went missing.

Tanai Smith, who had the IUD six weeks after delivering her baby, said she went for her annual checkup in October last year and was told that the IUD could not be found.

“They sent me to get two types of ultrasounds the same day and i was told once again that they didnt see an IUD. One day in the beginning of November i was at work i had a sharp pain and the bottom right of my stomach and the first thing that popped in my head was is this that IUD? 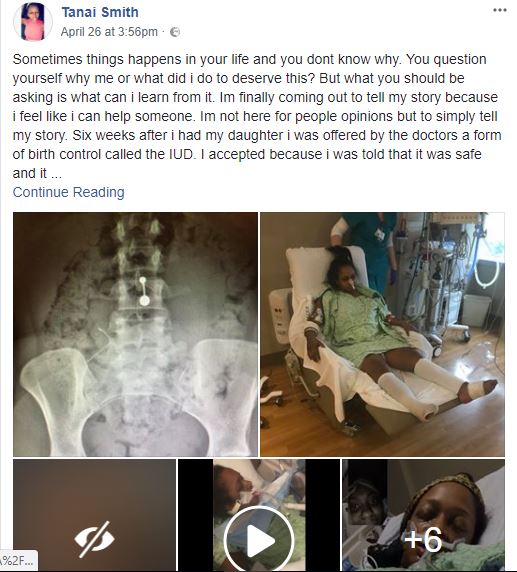 “I left work 3 hours early to go to the hospital … The doctor came in with a weird look on her face and said the IUD is definitely in there but its pushed up in your stomach so you will have to get surgery,” she narrated.

She underwent a surgery on December 13 and instead of one cut, she had three with one under her belly button and two on her sides.

“I was bleeding internally. After the surgery my mom was told that when they open me up, my ovaries was black and that they had to give me a hysterectomy. After the surgery i went into septic shock causing me to be in ICU for a few weeks. I died on that surgery table,” she added.

She said her organs begun to fail while in ICU and “I was on a breathing machine, I was on dialysis cause my kidneys wasn’t working right. Everything that could possibly go wrong went wrong.”

Tanai Smith said her parents were told that she wouldn’t make it but she did and is still at the hospital awaiting another surgery this week to amputate her toes which were affected by her failed organs.

She said at the beginning of her post that she wanted to tell her story because “I feel like I can help someone. I’m not here for people opinions but to simply tell my story.”

Her story generated over 28,000 comments on Facebook and was shared more than 40,000 times.

While others expressed their gratitude that she was alive, others shared their personal stories with IUDs. Some advised that she seeks legal help.

IUDs have always had side effects including irregular menstrual periods, changes in bleeding patterns or flow;
breakthrough bleeding, or heavier menstrual bleeding during the first few weeks after device insertion;
back pain; headache, nervousness, mild dizziness; nausea, vomiting, bloating; breast tenderness or pain; among others.

If you opt for the IUD birth control device, you have to always see a doctor and be sure it is well placed to avoid any complications.

Here are some comments to Tanai Smith’s story which was also shared on other social media platforms including Twitter by concerned users. 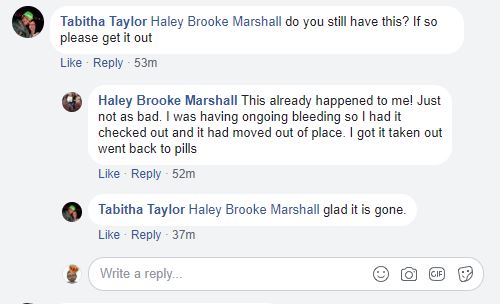 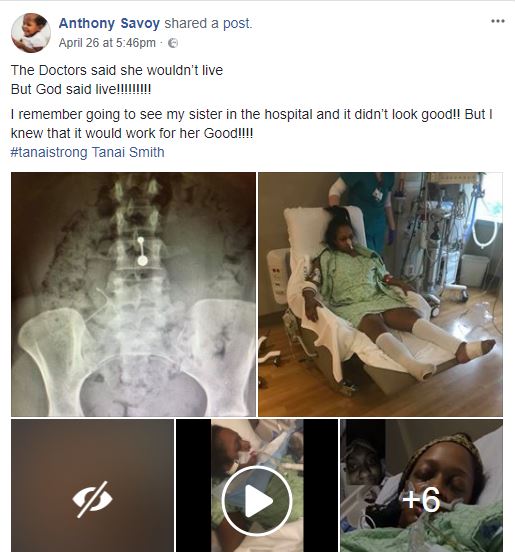 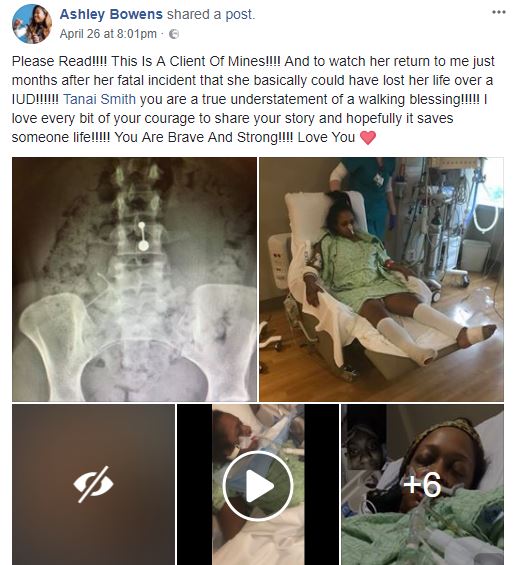 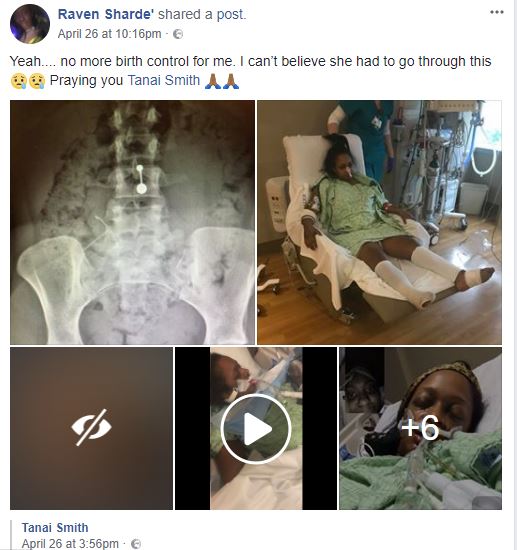 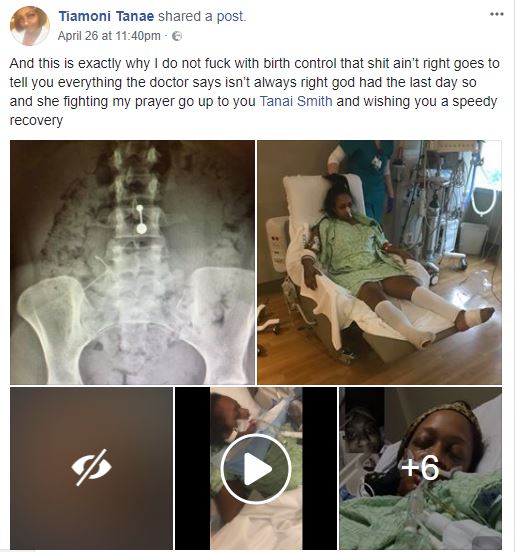 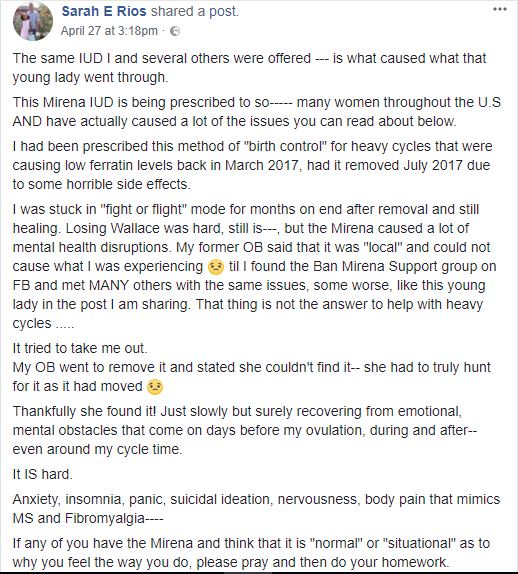 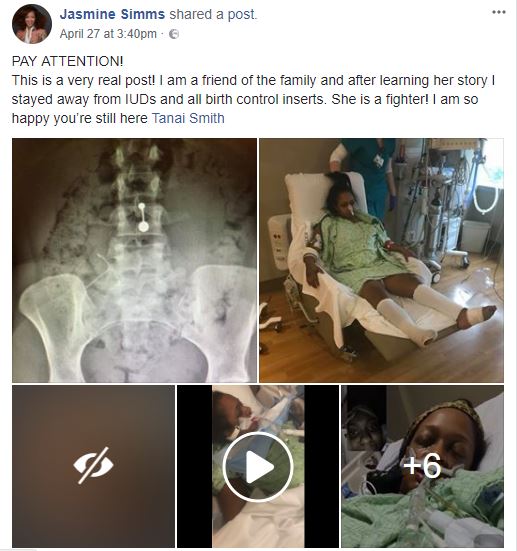 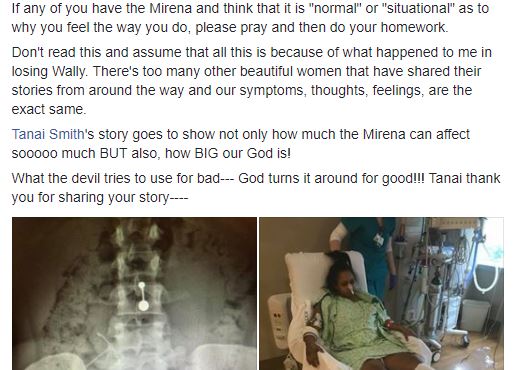 I’m sorry that you went through this. It must’ve been so hard and frightening. I can’t even imagine the pain and fear you were dealing with. But you’re alive and at the end of the day that’s all that matters!! I hope you live a happy and blessed life ???? you deserve it

Yikes. That’s why I just stick to the patch. pic.twitter.com/iM2F8Z3MnL

The patch is amazing. A lot of girls I know, didn’t even know about the patch until I brought it up! I didn’t know it existed until I told my doctor I didn’t want the shot, the iud, arm implant or pills.

It comes clear now. I have to talk to my doctor. The only con is allergic reaction to the glue. I get a little rash on my arm but hydrocortisone helps. But other than that, it’s the best one in my opinion.

that’s one reason i stopped with the patches . the sticky residue wasn’t working with my skin

i had the depo shot first, and it didn’t work out. then i had the patches and now i have the implant

Sorry to just insert myself in here, but why didn’t yall like the depo shot? I just got the shot two weeks ago and haven’t met anyone who’s had the shot and i rly wanna hear ur opinions on it

i didn’t like it because i spotted/bled for months. my libido was lowwww and i didn’t like the side effects. headache and mood swings. thankfully i didn’t get the weight gain but i wouldn’t recommend it to anyone; just thought it was the most convenient for me

Don’t be scared! For me, my periods transformed from being light/regular plus very rare cramping to constant bleeding, heavy flow (2-3 tampons/pads), and unbearable cramps. Everybody is different! If your IUD works for you, then it works!

I’ve had my iud ( 10 year) for almost 5 years now. I love it! No hormones is always best. 1st year was hell though not going to lie. Terrible cramps and the flow gets heavier. It gets better though, the body just has to adjust to the foreign object.

I’ve had mine for about 3 years now . No complications. Truth is EVERY single form of birth control has possible negative outcomes. Everyone is different, but at the end of the day to each is own.

Exactly . I feel this is the best method available! I use Mirena. The first time I had it, I had no menstrual cycle. 2nd time around… I still get my period but extremely light! Almost nothing ! Best birth control I’ve used thus far !

My obgyn cut my string too short and the string ended up turning upside down they had to use like a long fish hook looking took to fish it out . Worst pain of my life