Nigeria’s most dangerous outlaw, Lawrence Anini and his gang started their criminal activities in the 1980s as car hijackers, bus robbers and bank thieves before gradually extending their acts to other towns and cities far north and east of Benin.

Anini’s reign of terror, particularly in the old Bendel State (Now Edo and Delta States), however, began after two members of his gang were tried and prosecuted “against an earlier under-the-table ‘agreement’ with the police to destroy evidence against the gang members.”

Viewing this as police betrayal, Anini began retaliatory actions against the police.

In August 1986, Anini and his gang attacked a bank in Sabongida-Ora, killing a police officer and several others in the process.

This fatal incident put the security agencies on alert but two more police officers would later meet their deaths after attempting to stop Anini in September.

A number of robberies ensued resulting in the deaths of civilians. These periods were so bloody that Anini was even reportedly discussed at the State Security Council meeting, as he had started to hold the state captive.

Later in September, Anini personally shot a gas station attendant and threw the stolen money out for civilians to take.

On October 1, Independence Day, he and his gang launched another attack, killing another police officer. Casmir Igbokwe, the police commissioner of Edo State was almost killed in an ambush.

Alleged to be the one that would drive back to Benin City in a bid to escape the police, Anini and his gang, struck again in a series of robberies towards the end of October, killing many in the process.

Nigeria’s president at the time, General Ibrahim Babangida called for a state of emergency and a manhunt was launched in Bendel State, where it was believed that Anini and his gang were based.

Anini was eventually captured on December 3 in Benin City after locals gave information that he was found relaxing with several women.

Reports state that the police, who then did not recognize Anini, asked him if he knew where Anini was.

Anini told them that he was hiding in another room and tried to escape but was shot in the foot by one of the police officers.

The police later shot him several times in the leg to the extent that after his arrest, his leg had to be amputated.

With the fall of Anini, the police were able to close in on the rest of the gang, who highlighted collaborations they had with some high-ranking police officers. 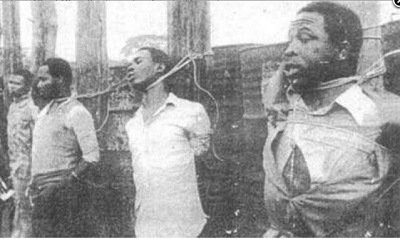 Anini, his gang, and five conspiring police officers were all put to death by a firing squad

Following a brief trial, Anini, his gang, and five conspiring police officers were all put to death by a firing squad on March 29, 1987.

Born in 1960 in a village about 20 miles from Benin City, present-day Edo State, Anini migrated to Benin at an early age where he became a skilled taxi driver.

He would later delve into the criminal business in the city and soon became a driver and transporter for gangs, criminal godfathers and thieves.

It is said that no armed had ever held the entire country on ransom as Anini when he started unleashing terror in several towns and cities across the country.