There is no accurate date that states when exactly he was born, research has concluded that he might have been born in 1703 due to the fact that he was just 4 years old when he was baptized in Germany in 1707.

Anton Wilhelm Amo was born in Gold Coast, present-day Ghana in a town in the Central Region called Axim. At the age of 4, Anton was taken by slavers and transported by the Dutch West Indies Company to Amsterdam in the Netherlands. Aton was presented as a gift to the Duke of Brunswick -Wolfenbuttel in Saxony at the time. The duke was known as Urlic Anton.

Duke Urlic accepted Anton and later adopted him treating him as his own son. The adoption was a joint decision between the Duke and his own son Agustus Wilhelm and in 1707, Anton was baptised in the palace’s chapel and was named Anton Wilhelm; he will later grow to add his original name Amo to his name.

While under the Wilhelm family, Anton was treated with respect and as royalty despite his race. He was educated in the palace like all royals until he was ready to go to the University. In 1727, at the age of 21, he was enrolled in the new and most reputable university at the time, the University of Halle in Germany.  The university was also noted to have the most prominent centre for enlightenment Movement for Franco-German intellectual studies.

While at the university, he studied and acquired great skill in French, Dutch, Latin, Greek and Hebrew in just two years and completed his first dissertation in 1729 “Dissertatio Inauguralis De Jure Maurorum in Europa”  which translates to  The Rights of Moors in Europe.

Anton furthered his education at the University of Wittenberg to study astronomy, history, law, politics, physiology, logic, metaphysics and medicine. in 1734, he was awarded a doctorate in Philosophy after finishing his thesis;“De humanae mantis apatheia” – On Apathy in the Human Mind.

After being awarded his doctorate, Anton went back to the University of Halle but this time to teach, and in 1736, he was made a professor. While at Halle, he held several talks on the subject of Philosophy and published a book on logic and psychology of knowledge, “Tractatus de arte sobrie et accuarate philosophandi”.

After the publication of his book, which was widely read among scholars, many disputes about his works began to make his life at Halle complicated. After falling into dispute with the dean of the University, Anton decided it was best that he left and applied for a teaching position at the University of Jena. In 1740, he officially made the move to Jena to continue his teaching in Philosophy.

Throughout his career, despite his knowledge and passion for philosophy, Anton was subjected to hate and racism and his works were sidelined due to his race. He did not receive the respect and platform that he needed to progress. After a few more years, his close friend and Chancellor of the University of Halle, Johannes Peter von Ludewig died and he was left with no other friend, protector or patron because the two sons of Duke Anton Ulrich had died in 1731 and 1735 respectively. It was then that Anton decided to move back to Axim in the Gold Coast in 1747.

After arriving in Axim, Anton lived in seclusion until he died in 1753. He was buried close to his house and his burial grounds can still be found. 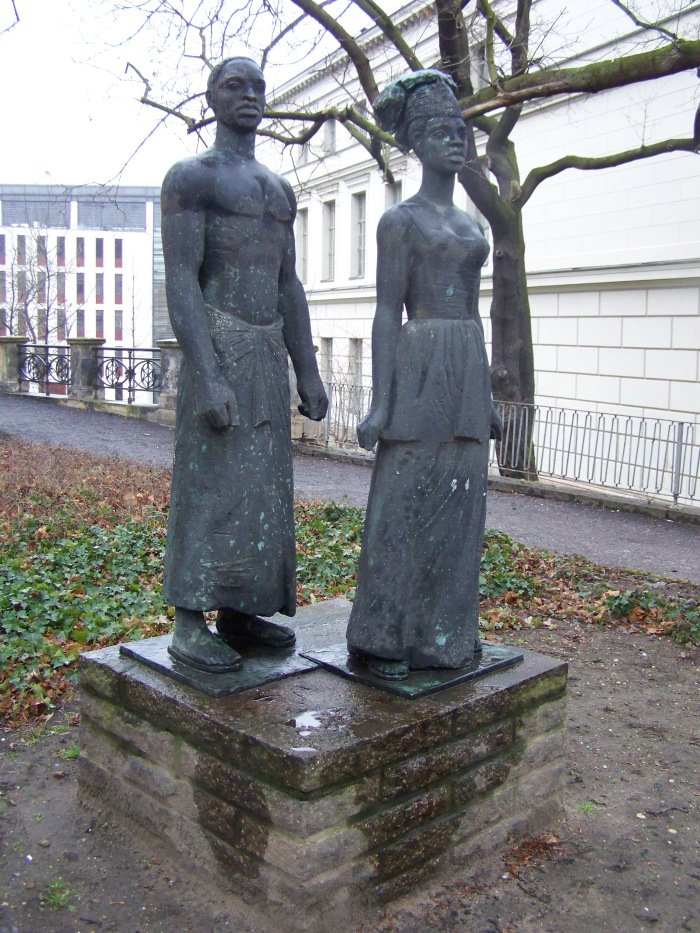 Statue of Anton W. Amo at the Halle University

Over the years, the life and times of Anton Wilhelm Amo has been celebrated worldwide. In Guniea, he is known as Antonius Guiliemus Amo Afer ab Aximo. In 1965, the University of Halle – Wittenberg mounted a statue in memory of the great African Philosopher. In 1994, the university also set up an award in his honour for students that achieve academic excellence in their postgraduate studies.

It is amazing to note that little to no mention is made of the great achiever in schools across Africa. This should however not be the case.

The story of great African achievers needs to be uncovered and told. For too long, the African has been thought off as a lesser race due to ignorance.