Internet connectivity in Africa has increased over the last few years, delivering access to close to a third of the population on the continent, according to Dawit Bekele, Regional Director for Africa of the Internet Society, an international organization commited to continued evolution and growth of the Internet for everyone.

Each year, they host the African Peering and Interconnection Forum (AfPIF) with a goal of achieving 80 percent local and 20 percent international Internet traffic by the year 2020.

“Since we first launched this event six years ago, we have seen a notable increase in investments and initiatives that have led to improvements in the extent and quality of national and regional interconnection,” says Bekele.

“This has been possible thanks to the connections people make at AfPIF. The forum has in particular enabled Africans to collaborate and work together towards the development of the Internet infrastructure on the continent.”

Promising to be more than just a forum, AfPIF connects key players in industry and government around policy and infrastructure needed to expand Internet access and services across Africa. AfPIF has previously been held in Kenya, Ghana, South Africa, Morocco, Senegal and Mozambique. Last year’s event featured 232 participants from 57 countries and an online participation of 978 people in 77 different countries, with the #AfPIF hashtag generating some social media buzz about the event over the years.

Thanks Franck Kiemde from Burkina Faso internet exchange for stopping by! Make good use of the peering manual #afpif pic.twitter.com/v7HMtcvFa0

This year, the Society is partnering with the Tanzania Internet Service Providers Association (TISPA) to hold the event in Dar es Salaam from 30 August to 1 September, 2016. TISPA Chairman Vinay Choudary shared his optimism in a statement about the partnership:

“We believe by working with AfPIF to host this auspicious event in August will be one leap forward for Tanzania in terms of network optimization.” 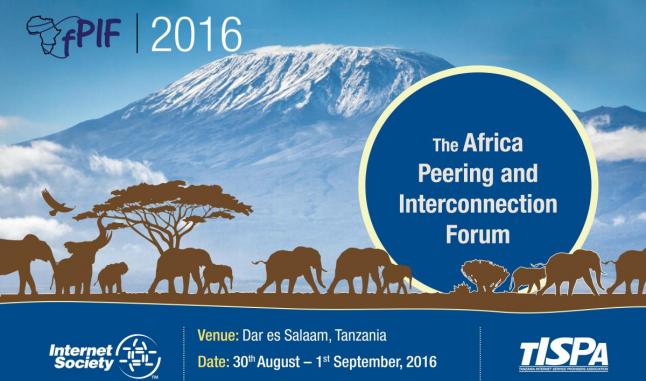