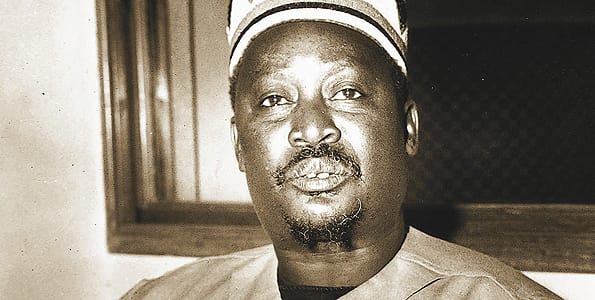 Jaramogi Oginga Odinga (pictured), a former leader of the Kenyan independence movement who later became a tribal chief and the nation’s first vice president, died on this day in 1994.

Odinga was born in October 1911 in what was formerly known as Bondo, British East Africa according to the leader’s autobiography, “Not Yet Uhuru.” Although he was born in to the Christian faith under the name Obadiah Adonijah, Odinga renounced his religion and embraced his Luo roots by taking the Oginga Odinga name. In 1947, Odinga sought to empower his people and began a thrift and trading company. His efforts led to him being referred to as Ker or King among the Luo.

In Luo tradition, kings of the tribe could not enter the world of politics, so he gave up the title of Ker and became the spokesperson for his tribe in 1957. That year, Odinga was elected as a member of the Legislative Council for the Central Nyanza.

In 1960, Odinga became a member of the  Kenya African National Union (KANU) along with Tom Mboya. When Kenya became a Republic in 1964, he was elected as the first Vice President.

Odinga did not support President Jomo Kenyatta run for the Kenyan government, so he stepped down and formed the socialist Kenya People’s Union (KPU) in opposition in 1966. Odinga’s defiance would lead to his arrest and detainment for two years.

Still vocally opposed against Kenyatta’s policies, Odinga would remain out of the public eye until the President’s death in 1978. Although he reentered politics on a much smaller scale, Odinga never rose to his former heights again and remained an opponent of Kenyatta until his own passing.

Odinga was seen by some Kenyans as an honest politician that was betrayed by Kenyatta, where others say that it was he who betrayed Kenyatta.