Photo by: Photo by Michael Wuertenberg 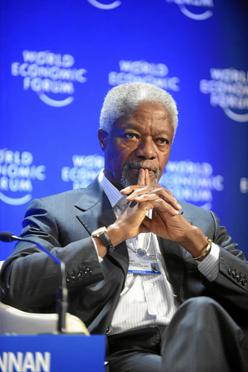 I was delighted to hear that Kofi Annan addressed the issue of poor leadership in Africa at the World Economic Forum in South Africa, which is an annual meeting that brings leaders from all over the world together with the aim of engaging in discourses that will improve the state of the world.

Kofi Annan blatantly made it clear that poor leadership has prevented development in Africa and will continue to prevent the continent from reaching its full potential if leaders do not see the need of operating an effective government that will serve its people.

He acknowledged the 5.5% Africa wide growth, but then remarked that "leadership deficit" meant little was being done to create jobs and lift millions out of poverty.

As someone who frequently visits various countries in Africa, it is always depressing to return to see people in the same poor conditions as they were previously in. Even college graduates wonder the purpose of a degree when they spend months and sometimes years looking for a decent job.

The lifestyle in some African countries has become extremely difficult to meet and people are really suffering in attempts to make day to day ends meet. When you make an assesment, you will see that all that is needed in these countries are good governance and proper management of resources.

I visited Ghana recently and I remember asking myself when I saw children selling water in the streets at a time when they were clearly supposed to be in school: Does the government really care? Our leaders win our votes with promises of making life better for us, fighting corruption, providing jobs, etc, but then over and over, they disappoint.

The sad fact about the condition in most African countries today is that the rich keeps getting richer and the poor keeps getting poorer. There are only a few opportunities for the poor to climb up the ladder or even attempt to compete. Our leaders are certainly not making much of a room for that to happen either as they busy themselves with their next strategic move on how to continue to cling to power, control resources, and make an exquisite living for themselves and their families as ordinary citizes continue to suffer.

I applaud the first step that Kofi Annan has taken in bringing the issue of poor leadership in Africa to the forefront, but will his remarks go beyond the walls of the World Economic Forum or will it be dismissed by African leaders as just another "political move" that had to be taken?

How can leaders such as Kofi Annan, who acknowledge the severity of the issue of poor leadership and governance in Africa help solve the problem?

These are open ended questions. Feel free to share your thoughts.