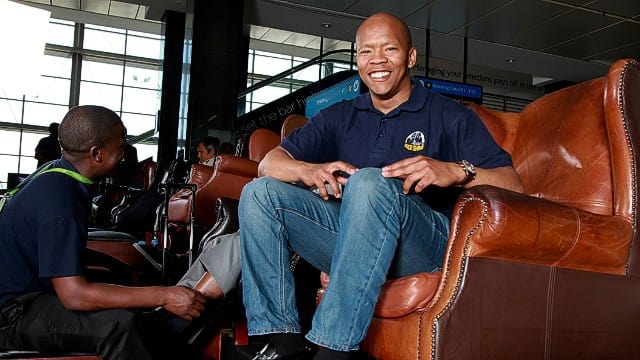 Lere Mgayiya (pictured) rose from being an egg seller in South Africa to owning what he calls the most lucrative shoe-shining business on the continent. Lere’s Shoe Shine has cornered the market in the businessman’s native country, and now he hopes to go global with his venture.

Mgayiya was profiled by CNN’s African Start Up, which focuses on entrepreneurs in countries across the continent and their journeys to success. In the case of Mgayiya, the path he took in making Lere’s Shoe Shine a destination was a rocky one by most standards.

If someone has shined your shoes in a South African airport, it’s probably thanks to Lere Mgayiya.

“We’re the biggest shoe-shine company in Africa,” he explains without sounding arrogant. “In Johannesburg, we shine about 350 pairs of shoes a day and about 120 pairs in Cape Town and another 120 in Durban.” In total, Lere’s Shoe Shine business has 45 employees across the three major airports, and the boss is now eyeing partnerships in America and U.K., as well as expansion across Africa.

But things weren’t always on such a sure footing for Mgayiya. The resourceful South African had to go through a string of failures to get to where he is today — a spectacular entrepreneurial journey of risk, belief, and reward.

Mgayiya once worked for South African Airways, distributing boarding cards for five years before he was laid off. He then began working with his family’s livestock business, but was asked to leave by his uncle as he felt his nephew’s plans were too ambitious. Mgayiya then began selling eggs at a profit of just $6 per egg box.

Times were lean for Mgayiya, but good fortune visited him when he became a show contestant for the Sandlam Money game, a game show geared towards entrepreneurs.

Mgayiya then hit rock bottom but made contact with those he knew from his time with the airline and decided on a shoe-shining business at Cape Town Airport.

Mgayiya once had business in all of South Africa’s airports, but now he’s down to just three airports: Cape Town, Durban, and Johannesburg.

Mgayiya hopes to expand to Angola, Kenya, and Nigeria along with sites in the United States and the U.K.