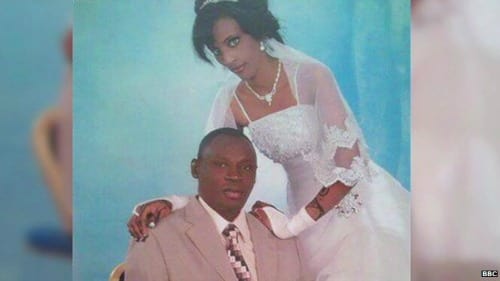 UPDATED 5/21/14, 3:30 P.M. EST: According to Sudanese Parliament Speaker Fatih Izz Al-Deen, the sentence against Meriam Yehya Ibrahim isn’t final. Al-Deen also countered Ibrahim’s claims that she was raised as a Christian by her mother, according to CNN.

Al-Deen says that the person who filed the complaint against Ibrahim was her own brother.

She is a Muslim raised in an Islamic environment and her brother, a Muslim, filed the complaint against her, according to Izz Al-Deen.

In fact, according to Ibrahim’s family, Ibrahim had been missing for years, and when they found her, they were “shocked” to find out she was married to a Christian. Furthermore, her family also maintains that Ibrahim’s mother is a “devout Muslim.”

Now that the case has received international attention, Al-Deen explained that Ibrahim’s death sentence isn’t final, because it still has to go through the judicial stages before reaching the constitutional court.

Meanwhile, both Mother and toddler are said to be struggling behind bars. Ibrahim is reportedly having a difficult pregnancy, and her request to be transferred to a private hospital was denied. In addition, Ibrahim’s 20-month-old son is said to be suffering due to poor hygiene and an infestation of bugs.

Ibrahim’s American husband, Daniel Wani, who is said to depend on Ibrahim greatly since he is wheelchair bound, plans to file an appeal in the next couple of days.

Meriam Yehya Ibrahim (pictured right), a pregnant Sudanese woman, was sentenced to death in a Khartoum court for apostasy, or a denouncement of faith, for marrying a Christian man earlier this week.

Human Rights organization Amnesty International UK reportedly caught wind of the case, which they called “appalling and abhorrent.” Still, Sudan officials say that Ibrahim violated the country’s Sharia law and even accused her of adultery for marrying Daniel Wani (pictured) who spoke with CNN on Thursday and doesn’t know what he’ll do to combat this.

Ibrahim, who is eight months pregnant, is currently detained with her 20-month-old son. Under Sharia law, Ibrahim’s refusal of Islam and marrying of a Christian man was cause for her to be sentenced to death.

The court also ordered 100 lashes for Ibrahim. The death sentence actually took place on Sunday, but the court gave Ibrahim until Thursday to return to Islam. Protestors have gathered in support of Ibrahim, but were met with pro-Sharia law protestors who praised the decision.

Even though Ibrahim was raised as an orthodox Christian — her Muslim father left the family when she was young — the court refused to use her given name,and instead used her Muslim name Adraf Al-Hadi Mohammed Abdullah.

“The fact that a woman has been sentenced to death for her religious choice, and to flogging for being married to a man of an allegedly different religion is appalling and abhorrent,” said Amnesty’s Manar Idriss.

There has been an international response to Ibrahim’s case, with the embassies of the United States, the United Kingdom, Canada, and the Netherlands issuing a joint statement blasting the decision and supporting Ibrahim’s right to choose her own religion.

Ibrahim’s lawyer is continuing to rally for her freedom, even under the constant fear of death threats and the like.

According to the law, Sudan judges will not carry out Ibrahim’s sentence until her youngest child is weaned.