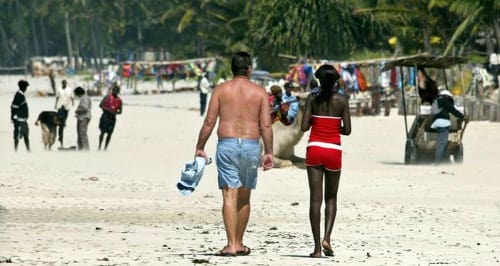 Malindi, a coastal town in the African nation of Kenya, is both a vacation destination and the site of a hidden sex tourism network that employs children as young as 12. The juvenile sex workers say that their clients are Italian men that are old enough to be these children’s grandparents.

The BBC sent a reporter to the region to investigate Malindi’s hidden prostitution business. The BBC’s revelation isn’t new to some, as a 2006 report from Irin News detailed the heinous practice along with several other publications over the years.

What is shocking, however, is that the young boys and girls who sell their bodies for money say that people paying for their services are often senior citizens.

According to the BBC report, many of the clients that come trolling the beaches of Malindi for sex are Italian men between the ages of 50 and 80. 16-year-old sex worker Maria says she fetches around $60 dollars for her services. So warped are the perspectives of these young sex workers that they truly believe the practice to be fair: in fact, a sex worker can earn more in two days than a teacher in the town earns in one month.

The country has been attempting to combat sex tourism in the town, but there are many that believe the practice is quietly endorsed. Parents do not question their children who come home with extra money, and elders reportedly turn a blind eye toward the acts they witness.

Tragically, the children have been sold the dream that marrying a rich Italian is the way out of poverty.

Maria doesn’t see her work as bad thing, and thinks the exchange of money for sex is fair, “It’s right because they give us money. It shouldn’t be stopped,” she said.

SEE ALSO: Bless Us, Mothers, As We Falter